Country
Israel
Duration
8 Days/7 Nights
Travel Type
Self Drive
Discover Israel with a self-drive tour. Explore the archeological sites and natural wonders from Tel Aviv to Galilee, and the Dead Sea to Jerusalem. Hotels and car rental are included. Visits are on your own without a guide. Check in on Saturdays will be possible only 2 hours after end of the Shabbat (in the evening). Rental car- please see “Important information for the renter” here below. V.A.T. Customers will be exempted from paying V.A.T under the following conditions: The renter holds a foreign passport and is not an Israeli citizen. The rental vehicle is a non – commercial vehicle. The vehicle is rented for personal use only. In case the renter or any additional driver do not qualify for all of the above criteria, V.A.T will be charged. This also applies to renters presenting prepaid vouchers.

Entrance fees to sites visited – Any guide service – Lunches and dinners – Extra fee of CAD85 (as per today) for pick-up and return of car at Ben Gurion Airport,

Arrive at Ben Gurion International Airport- Welcome to Israel! An Amiel Tours representative will provide assistance through baggage claim and customs, and escort you to your driver. Transfer to Tel Aviv, check in and overnight at the hotel in Tel Aviv
2

Today is a free day to enjoy Tel Aviv’s beaches, or join your guide for a walking tour of “The City That Never Sleeps’’. Start the day with a visit to the ancient port city of Jaffa (Yafo), just south of Tel Aviv, for a beautiful panoramic view of Tel Aviv which was the first Jewish city of the modern era, established in 1909. Pass by the charming Jaffa Flea Market and proceed to Neve Tzedek, Tel Aviv’s hip neighborhood where the intellectual elite lived during Israel’s early days. Walk along Rothschild Boulevard, the beating heart of Tel Aviv, and home to “The White City”, a collection of Tel Aviv’s most prominent Bauhaus (International Style) buildings, built during the 1930’s and the 1940’s; this functional architecture not only created well designed objects, but also a cohesive urban landscape unparalleled throughout the world, and thus, recognized by UNESCO as a World Cultural Heritage Site. Overnight in Tel Aviv.
3

Fly & Drive Option: After check-out, car pickup at the nearest station. Private car Option: After check-out, meet your guide at the hotel lobby. Depart Tel Aviv and travel north to visit the ancient city of Caesarea, built by Herod the Great and once the seat of Roman rule in the region. The city and its archeological wonders are a testament to its significance throughout the ages. The ancient port, the Roman hippodrome and amphitheater and an impressive palace are among the many historical treasures in this fascinating ancient city. Proceed to the ancient crusader port city of Acco, the fascinating UNESCO World Heritage Center, with new excavations 1,000 years old. Visit the Crusader Halls and the Hospitaller Fortress and see the underground tunnels and pathways crossing the old town center. Look upon the port and fortifications that enabled the inhabitants of the town to resist the invasion of Napoleon Bonaparte. Spend some time walking through the Arab Bazaar with vendors selling fresh fish and other goods. The day ends driving to Tiberias, on the shores of the Sea of Galilee, for overnight
4

Start the day in Nazareth, the cradle of Christianity, where tradition tells us that the angel Gabriel told Mary that she would conceive by the power of the Holy Spirit, and the place where Jesus spent his childhood and youth. In the afternoon, explore the most iconic Christian Sites in the northern shores of the Sea of Galilee. Visit Capernaum, where a Second Century synagogue tells the story of this ancient community. According to the Christian tradition, Jesus served here as a local rabbi and performed miracles. The traditional house of Saint Peter is also located here. Proceed to the Mount of Beatitudes where Jesus gave his famous Sermon on the Mount. Enjoy a magnificent view of the northern part of Sea of Galilee. Overnight in Tiberias

After breakfast, visit Safed, known as the center of Jewish mysticism past and present, this breathtaking ancient hilltop city is the highest in the Galilee and all of Israel - geologically and spiritually. Explore one of the four sacred cities in Judaism, walk the winding cobblestone alleys in the Old City, view unique stone buildings and continue on to the Artists’ Colony. Your visit may also include the famous synagogues of Safed - Ha'ari, Abuhav and Yosef Caro Synagogue. Ascend the Golan Heights and visit the Hula Lake, a paradise for birds and visitors, located along one of the most significant bird migration routes in the world.Hundreds of thousands of migrating birds and more than 200 species of waterfowl stop here on their way from Europe to Africa and vice versa. Next, well head to the Har Bental overlook. From this former military base, we can look into Syria and learn about the village of Kuneitra and the 1967 & 1973 Wars. End the day in Katzrin, the “Capital of the Golan’’. Enjoy a tour and wine tasting at the Golan Heights Winery, one of the most emblematic and well-known wineries in Israel, and a symbol of the rebirth of the winemaking industry in Israel. Learn about the unique terroir of the Golan Heights, the art of winegrowing, and the story of the winery’s founding. Overnight in Tiberias.
6

Depart Tiberias and drive south along the Jordan Valley to the Dead Sea, the lowest point on Earth. Start. Begin at the legendary mountaintop plateau of Masada and ascend by cable car to the ancient fortress. Explore the site with its synagogue and bathhouse. And hear about the last stronghold of the Jewish Zealots in their struggle against the Romans, as you learn why Masada became a symbol of the modern State of Israel.Continue to one of the resorts on the shores of the Dead Sea, whose waters are intensely saline and rich in minerals. At the lowest point on the surface of the earth, it is also a magically serene and quiet place. Savour the opportunity to enjoy lunch and the spa facilities, (public beaches available, spa treatments not included). In the afternoon, drive by the Judean Wilderness to Jerusalem, the Holy City, for overnight
7

Fly & Drive Option: car return at the nearest station and optional tour. Private car Option: free day or optional tour. Today embark on a walking tour of the Old City of Jerusalem. Within its approximately 1 square kilometer, these mighty walls built by the Ottomans in the 16th Century guard the most significant holy places for the three main monotheist religions in the world, Christianity, Islam, and Judaism. Walk by the Jewish Quarter, passing by the famous Hurva Synagogue to the Roman Cardo, and view the unearthed main Roman thoroughfare and ancient marketplace lined with columns. Discover a different perspective of life in the Old City with a secret walk through its rooftops, and arrive to the Wailing Wall, last remnant of the Second Temple of Jerusalem and holiest site for the Jewish people. From here you will also get a glimpse of the Dome of the Rock, where according to Muslim Tradition Prophet Mohammed made his “Night Journey” and ascended to Fleaven. Walk the Via Dolorosa, the Way of the Cross, to the Church of the Holy Sepulcher. The church is a complex of various chapels built on what was called the Hill of Golgotha. The site is mentioned in all four canonical Gospels, and it contains, according to traditions dating back to at least the fourth century, the Calvary, where Jesus was crucified, and the Tomb of Christ, where he was buried and resurrected. Free time at the famous Suk, the Arab Market of the Old City, overnight in Jerusalem.
8

Today you bid farewell to Jerusalem and transfer to the airport for your departure flight.
City
Hotel
Jerusalem 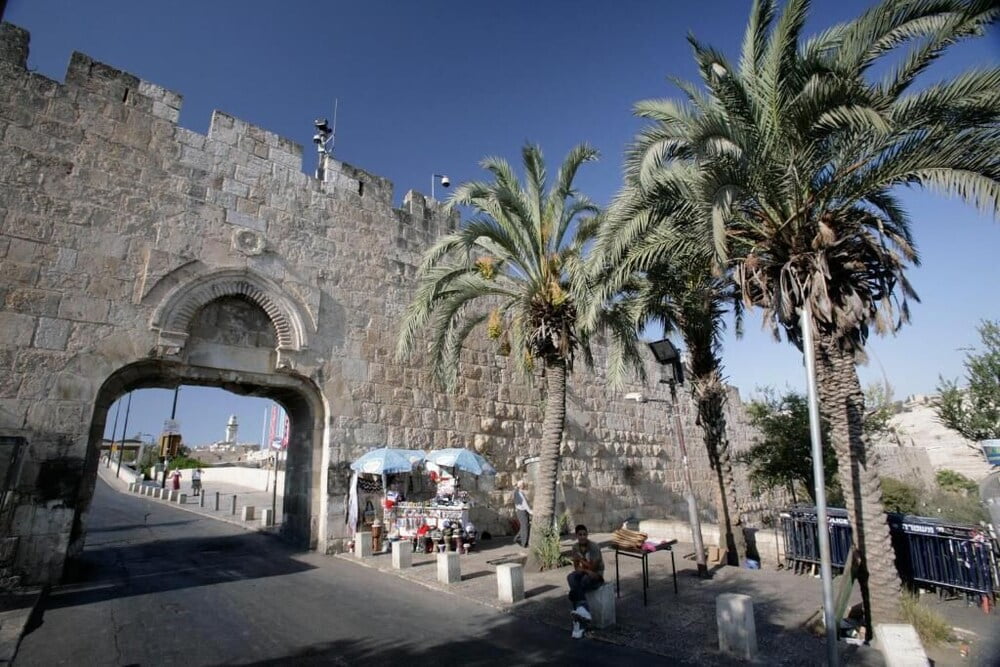 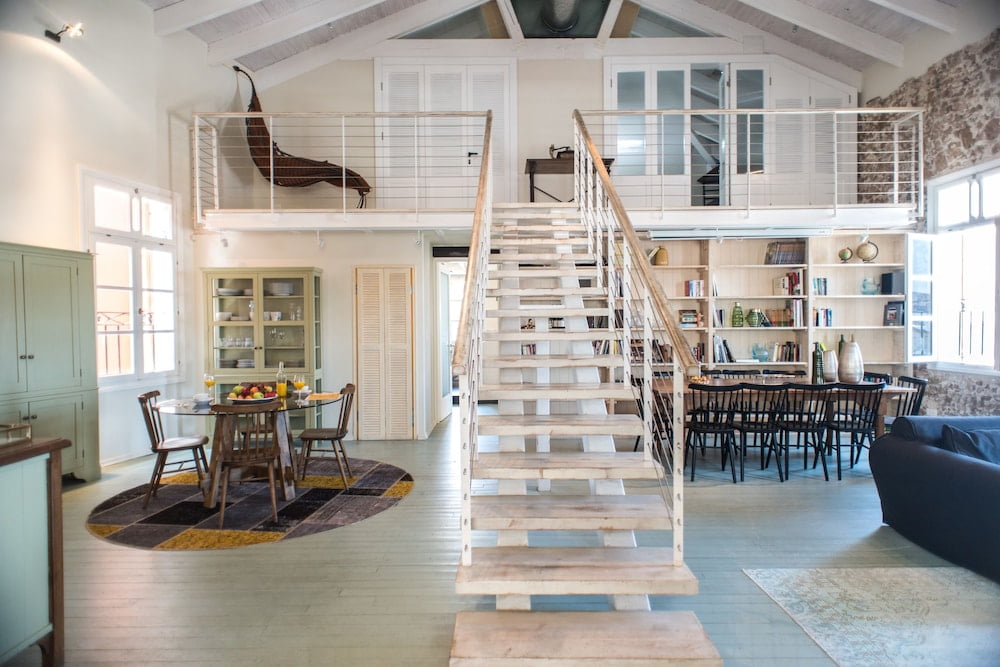 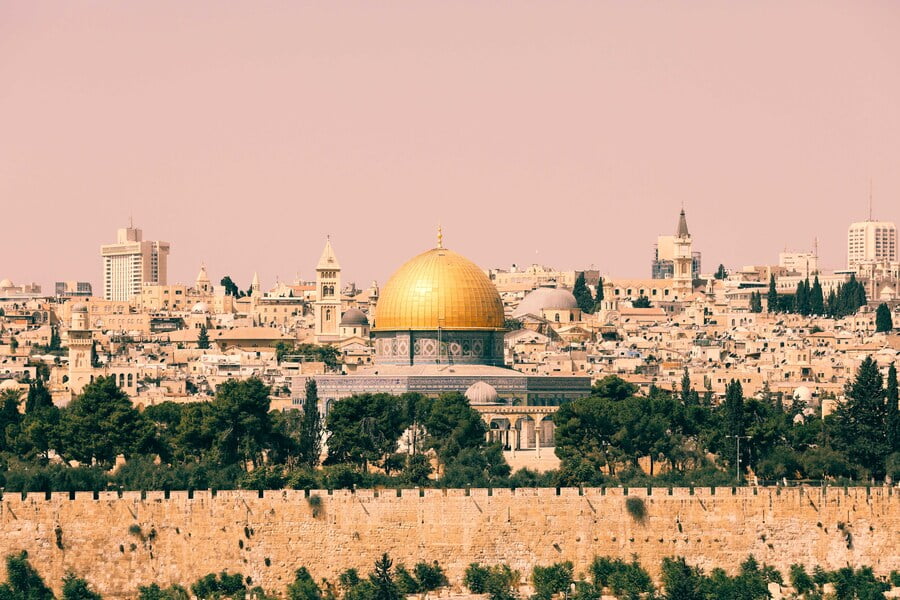 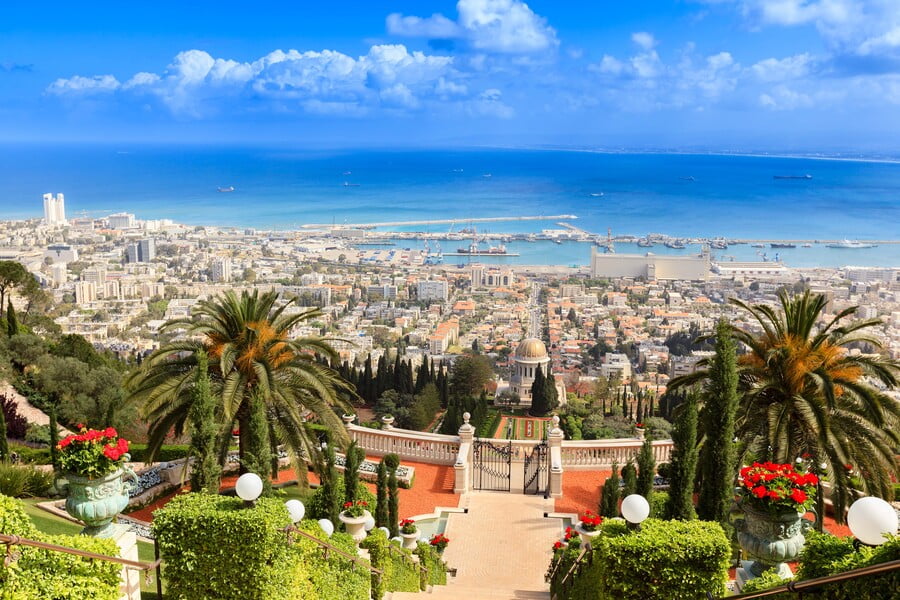 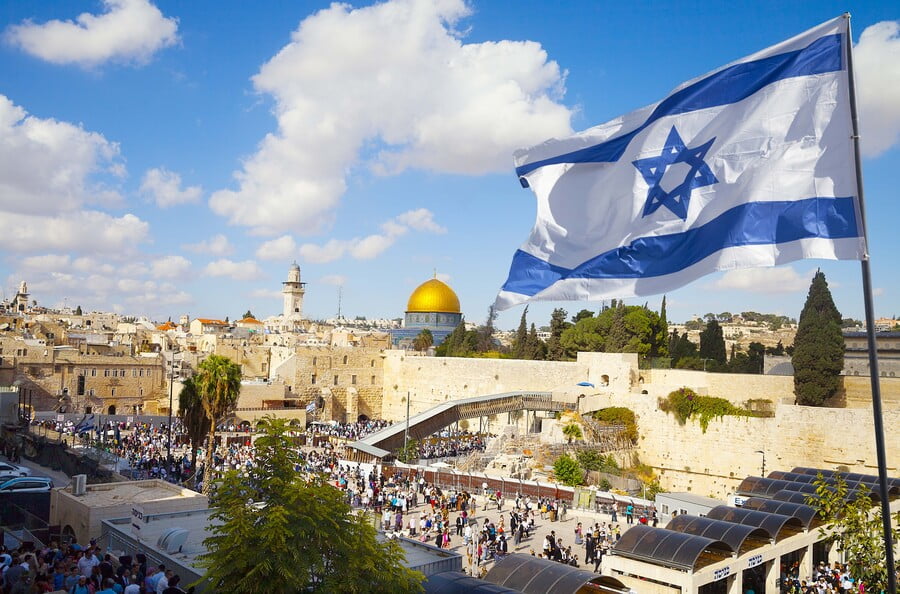 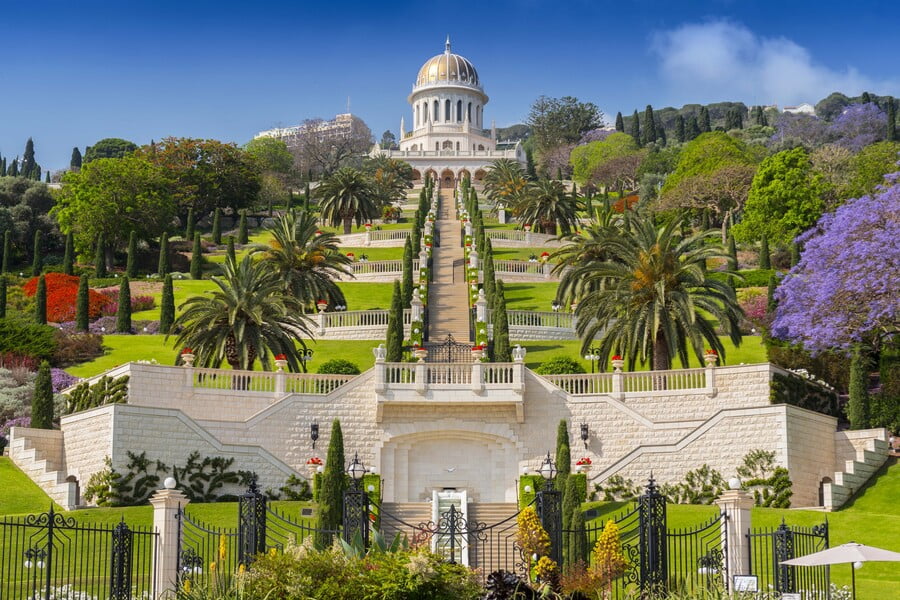 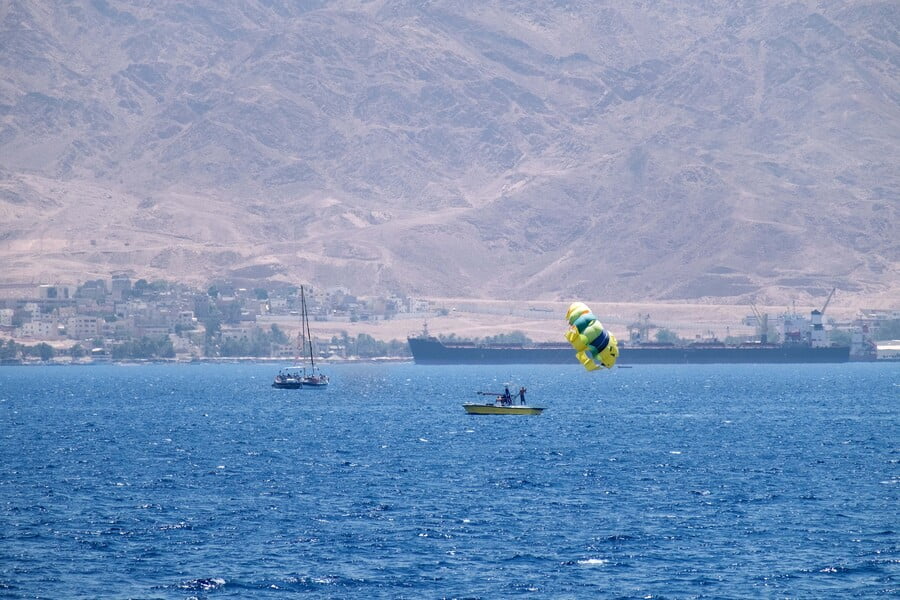