** GROUP SIZE: Maximum of 16 passengers per group. Some shared services (tours, trains, bus transfers) are exceptions, where  the group may join a bigger group for that particular service. **

** Minimum of 2 passengers to guarantee this tour.**

Transfer in from airport to hotel in Buenos Aires, with guide.
Accommodation: Buenos Aires for 2 nights
2

Shared tour with bilingual guide (Spanish & English)
Duration: 4 hrs approx. Hightlights: Recoleta – Palermo – Plaza de Mayo – Puerto Madero – San Telmo – La Boca
This is the perfect tour to discover the charm of Argentina’s capital, from the chic districts of Recoleta and Palermo, to historic Plaza de Mayo, and architectural icons such as the Colon opera house, the Metropolitan Cathedral and the palace of Congress. The program finishes in old town San Telmo, home of the city’s aristocracy until the late 19th century; Caminito street, in La Boca, the colorful shelter for Italian immigrants by the Riachuelo, and the young thriving restaurant scene at the Puerto Madero waterfront. Lunch included (but drinks not included).
*Kindly note that the return after the lunch is not included.

DINNER AND TANGO SHOW AT ALJIBE TANGO WITH ROUND TRIP TRANSFERS
2.30 hours duration – Shared Services. Beverages included.
Famous for its amazing nightlife and for being the land of Carlos Gardel, Buenos Aires countless gastronomic and artistic options. Tango portrays the ‘Queen of the River Plate’ (‘Reina del Plata’). We will enjoy an unforgettable night, surrender to the magic of this city that never sleeps and to the charm of this overwhelming and sanguine music —main protagonist of the night— while enjoying the best of its varied gastronomic offer. This typical early 20th century house is an ideal stage for a unique show: 15 artists, one tango orchestras, a folk music group, dancers and singer.

Transfer out from hotel in downtown to domestic airport with guide. Flight to El Calafate (not included). Transfer in from Calafate airport to hotel with English and Spanish speaking guide.
Overnight in El Calafate. (B)
Accommodation: El Calafate for 3 nights
4

FULL DAY PERITO MORENO GLACIER TOUR
Duration: 8 hrs approx. – Shared Service with English or Spanish speaking guide. Fee included.
The Perito Moreno Glacier rises majestically 80 km away from El Calafate. This is one of the largest and the only advancing glacier in the world, as well as the biggest attraction at Los Glaciares National Park, a 600,000-hectare protected area covered by an ice mantle. We will start by penetrating the Patagonian Andean forest and make a first breathtaking stop at “Curva de los Suspiros” (Curve of Sighs), where we will enjoy a first view of this incredible natural wonder. When we approach the glacier, we will walk down the catwalks to approach the glacier and admire from different panoramic points this wonderful creation of Mother Nature. We will be able to contemplate very
closely when varied-sized ice blocks loosen and fall into the water with a great thunder becoming beautiful ice floes in the deep waters of the Lago Argentino. This day will be an unforgettable experience, a once in a lifetime delight.

OPTIONAL WITH EXTRA COST:
SAFARI NAUTICO NAVIGATION TICKET (minimum 2 passengers)
Duration: 1 hr. approx.
This activity is an ideal complement to the Perito Moreno glacier tour. It will allow us to appreciate very closely this wonder of nature. We will sail out of Bajo de las Sombras Bay port, 7 km away from the glacier’s catwalks, down to the southern side of the glacier. On our way, we shall contemplate ice blocks falling off until reaching the southern point of Los Témpanos canal, until reaching the standing point 300 m away from the southern wall of the glacier, where we shall stop to admire its greatness.

Overnight in El Calafate. (B)

Free day for exploring Calafate at your own pace.

4X4 OFF-ROAD MOUNT FRÍAS WITH LUNCH (minimum 2 passengers)
Duration: 5:30 hs approx. Shared service with English or Spanish speaking guide
Highlights: Mount Frías – Argentino Lake – Torres del Paine.
We start the 4×4 trip from the farm gate ascending the Mount Frias, for trails with views of the main body of the Argentino Lake. After twenty minutes we stop in the first viewing point at 450 meters watching at the Centinela river valley. We continue rising to the second viewing point at 1030 meters with incredible views of Torres del Paine, Southern and Northern channels of the Argentino Lake, the highest picks of the Andes mountain chain and the Fitz Roy mount, if the weather allow us. We continue the 4×4 adventure descending the Frias Mount trought the lengas forest for the east slope of the mount, finishing in Estancia Alice. Return back to El Calafate.

ALL GLACIERS NAVIGATION – FEE INCLUDED (minimum 2 passengers)
Duration: 8 hs approx. Shared service with English or Spanish speaking guide
From the Port of Punta Bandera, located 47 km from El Calafate, we start sailing through the North Arm of Lake Argentino. A few minutes after leaving, we crossed a natural funnel known as the Devil’s Mouth to the Upsala Canal. There we will navigate around large icebergs that emerge from the front of the Upsala Glacier. Then, we enter the sector of the lake known as Canal Spegazzini and in which we can enjoy observing the impressive Dry Glacier. From there we continue sailing to the front of the Spegazzini Glacier where we will also see the Heim Sur and Peineta glaciers. It is at this time that we prepare to disembark at the Spegazzini base and begin the visit to the area by walking through a beautiful path in the forest, until we arrive at the Spegazzini Refuge. This 300-meter path is accessible and when we go through it we stop at stations and viewpoints with views of the entire Los Glaciares Bay. In this refuge, one of a kind, we can have lunch, visit the shop or contemplate the landscape. Those who like to walk. they can choose to take the mountain trail. This route is a trek of medium difficulty through a wooded path with natural viewpoints and full of incredible views. It ends at the disembarkation point.

Overnight in El Calafate. (B)

One way transfer out from hotel to Calafate bus station with guide. Regular bus tickets from El Calafate (Argentina) to Puerto Natales (Chile). Upon your arrival you will be meet and transferred to the selected hotel in Puerto Natales.
(Private service without guide).
Puerto Natales is the gateway to the Torres del Paine National Park and outdoor adventure in the Patagonia region. The small town is located on the Señoret Channel along a scenic fjord, set against the dramatic backdrop of the southernmost peaks of the Andes. As a tourist hub, you’ll be able to find great food, supplies, and more to fuel up for your trek, along with local attractions to explore.
Overnight in Puerto Natales. (B)
Accommodation: Puerto Natales for 3 nights
7

OPTIONAL WITH EXTRA COST:
BASE TORRES (minimum 2 passengers)
Shared service
Departure at 7:00 AM. from the hotel in Puerto Natales, towards the Torres del Paine National Park.
We leave the vehicle at the beginning of the trail, starting the trek of High difficulty level. It takes around 7 to 8 hrs and it will take us to the base of the three granite towers “Las Torres del Paine”. For this day we have contemplated a Box Lunch Lunch during the sunset excursion we return to Puerto Natales.

FULL DAY BALMACEDA & SERRANO GLACIER (WITH LUNCH) (REGULAR SERVICE)
Lunch included. Regular service
We invite you to know the incredible world of the fjords. On the way you can observe native wildlife, visit the Balmaceda and Serrano glaciers and enjoy a delicious Whiskey with millennial ice.

OPTIONAL WITH EXTRA COST:
FULL DAY ESTANCIA TOUR
Shared service
Our Full Day Estancia Tour is a perfect way to live and learn about life at a Patagonian ranch combined with navigation through the fjords, adventurous activities and delicious food. You will meet our intelligent sheepdogs and learn how we through holistic livestock management perform responsible shearing of our sheep and how the process and classification of wool work. We invite you to be part of our project based on animal welfare, conservation of nature, sustainable production and high-quality service.

Transfer out from hotel to the bus station. Regular bus from Puerto Natales to Punta Arenas to arrive at the airport. Domestic flight to Santiago (not included). Upon your arrival to Santiago airport, an adssistant will be waiting to take you to your hotel. Please look for the sign with your name on it. Dynamic and cosmopolitan Santiago is a vital and versatile city. Home to many events showcasing the very best of Chilean culture, it also hosts superb international festivals of sound, flavor, and color. The Chilean capital breathes new life into all its visitors!
Overnight at Santiago. (B)
Accommodation: Santiago for 2 nights
10

HALF DAY SANTIAGO
Shared service
Described by the international media as a surprising destination, Santiago stands out for being a cosmopolitan and modern city that perfectly combines its traditions with a modern outlook. The tour will take you to visit the heart of the city and its emblematic sites such as the Plaza de Armas, the Cathedral, Santiago’s Central Postal Office and its Municipality. We will also visit the Moneda Palace, which is the government’s headquarters as well as the traditional neighborhoods of the historic city center. The tour also includes a visit to the Santa Lucia hill, named Huelén by the natives. It is a real urban oasis in the center of the city. There we will learn more about Chile’s history and enjoy some of the best views in the city. After knowing Santiago, we will arrive to Barrio Lastarria, famous by it cultural, inherited and gastronomical offer. The second part of the tour will take you to the eastern side of the city, to the financial heart of Santiago, known for its modern buildings, impressive glass skyscrapers and its impressive sculptures designed by prominent national architects. There, you will see exactly why this area is known as “Sanhattan” among the locals.

OPTIONAL WITH EXTRA COST:
FULL DAY VIÑA DEL MAR & VALPARAÍSO
Shared service
Known as the “Garden City”, for originally being surrounded by largely green areas and for now preserving its extensive and beautiful urban gardens, with the Pacific Ocean as its backdrop, Viña del Mar is undoubtedly one of Chile’s unmissable destinations. Viña del Mar stands out for its beautiful architecture, its impressive palaces and famous Flower Clock, photographed by tourists from all over the world. During the tour, you will have the option to have lunch in one of the numerous restaurants in the city, with a variety of delicious sea food on offer. We will travel along the sea front, and enjoy the views of the Pacific Ocean, before arriving at the most important ports in Chile; Valparaiso. It was listed as a Unesco World Heritage site thanks to its colorful beauty and the uniqueness of its location on the hills, which create a natural Amphitheatre with the ocean as its stage. We will visit Cerro Alegre, where you can truly appreciate the magic of the city, with its picturesque funiculars, multi-colored neighborhoods and unforgettable sea views. We will then head to the Sotomayor Square, to see the Monument of the Heroes of Iquique. Once in the port, there will be the option to take a boat out around Valparaíso’s bay to enjoy the views of the colorful hills from a different perspective.

Overnight at Santiago. (B)

At proper time you will be transferred to airport in Santiago to take your international flight. (B) 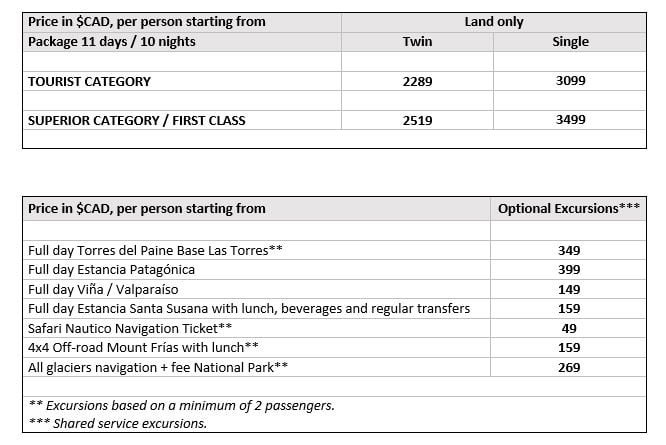 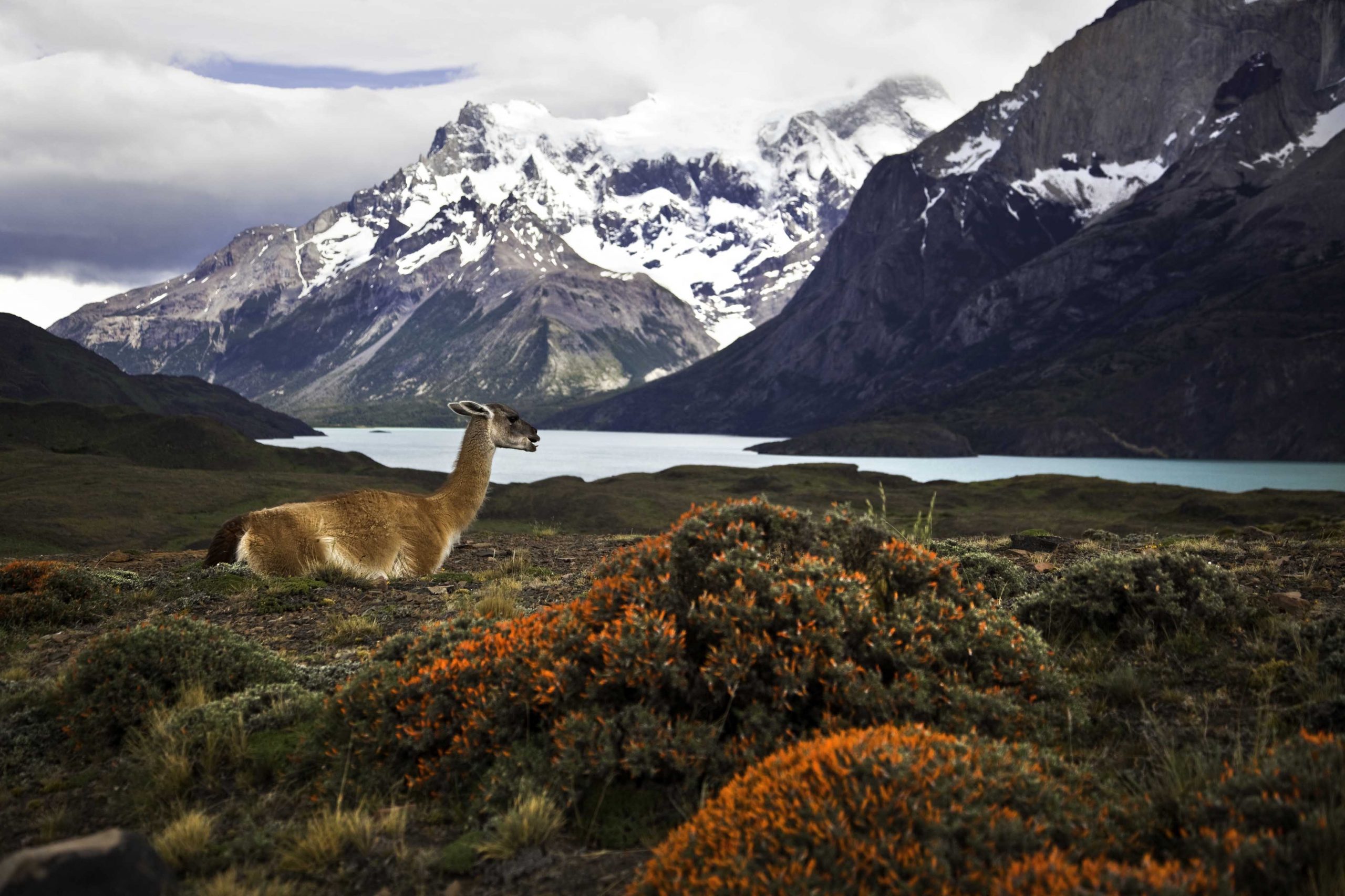 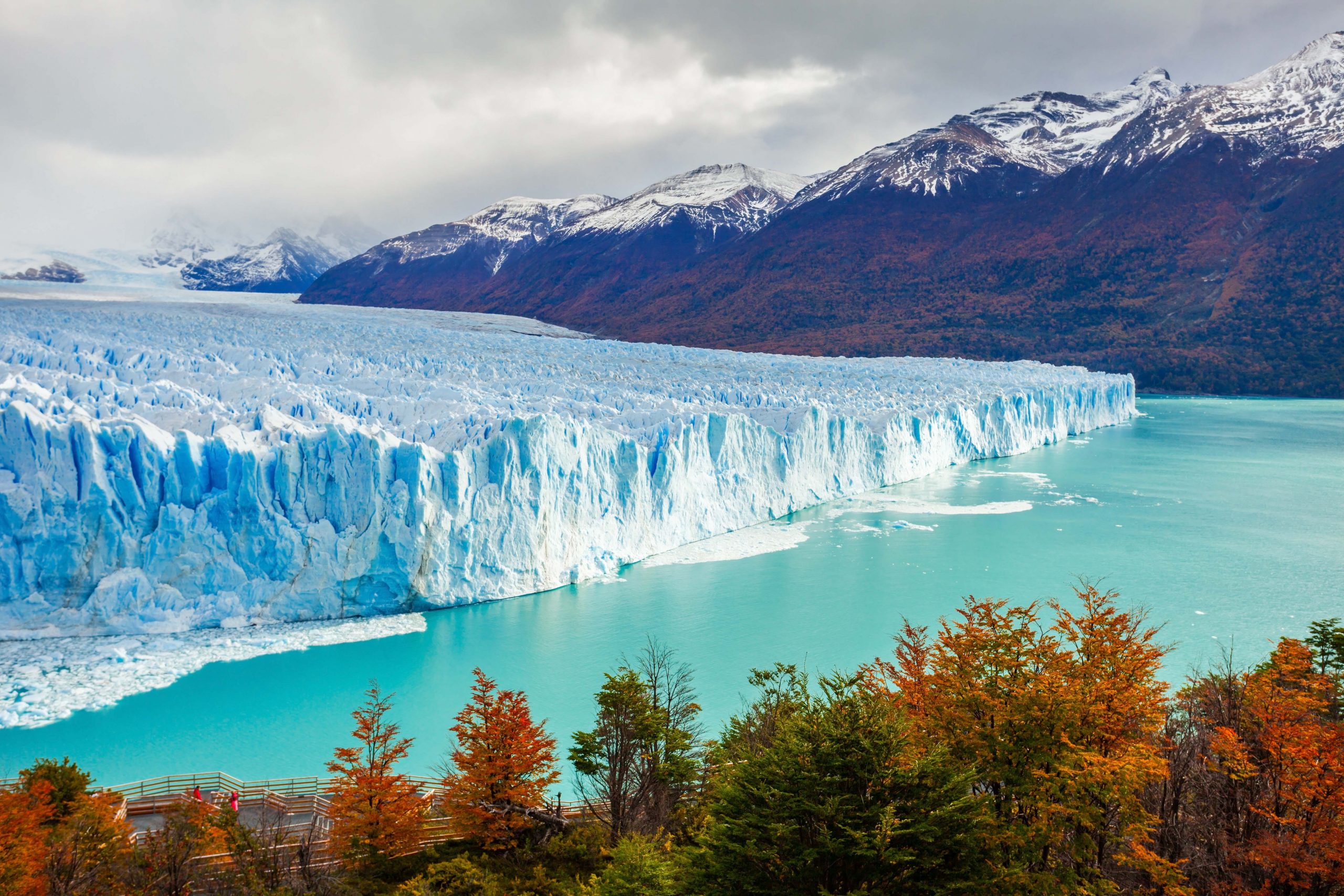 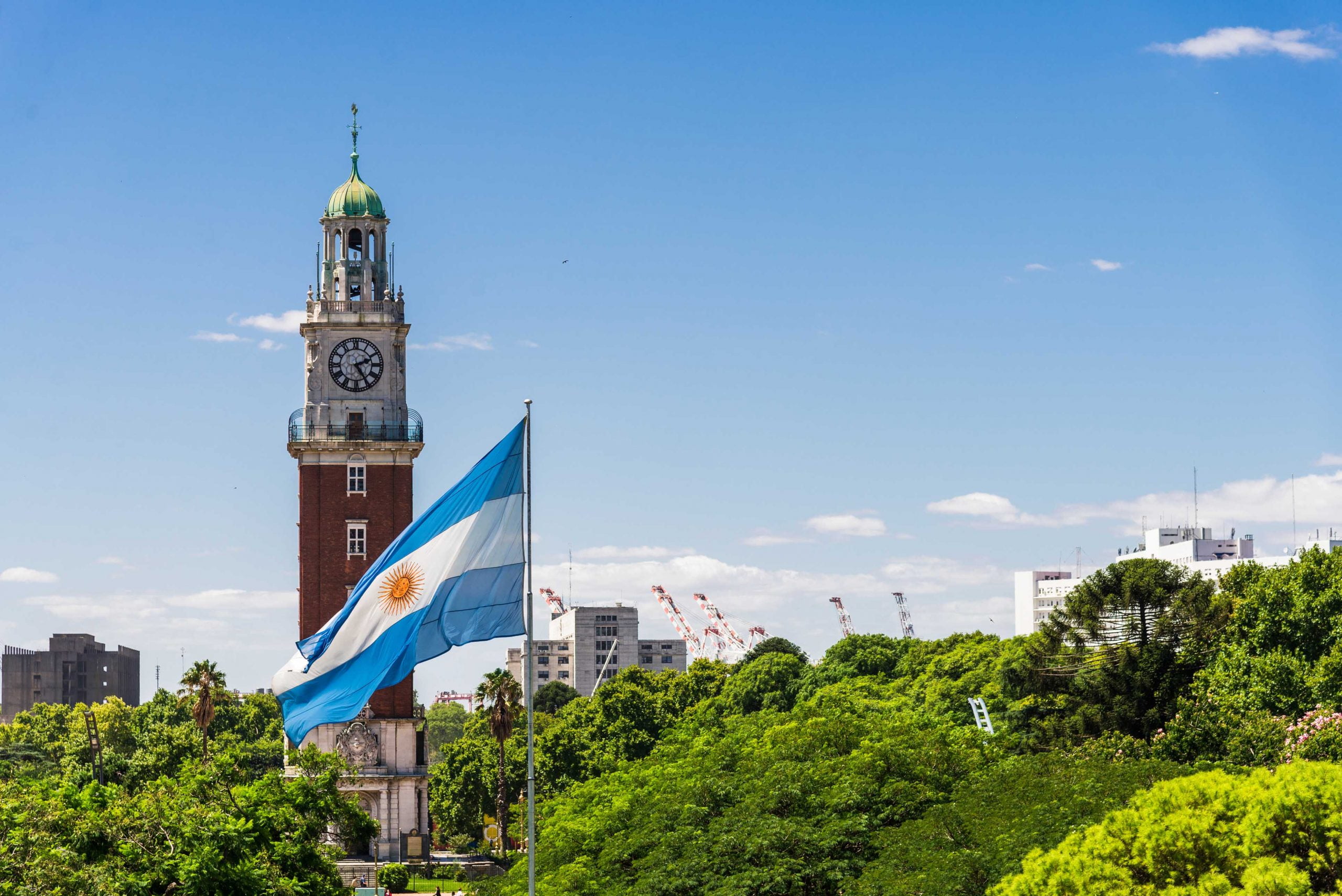 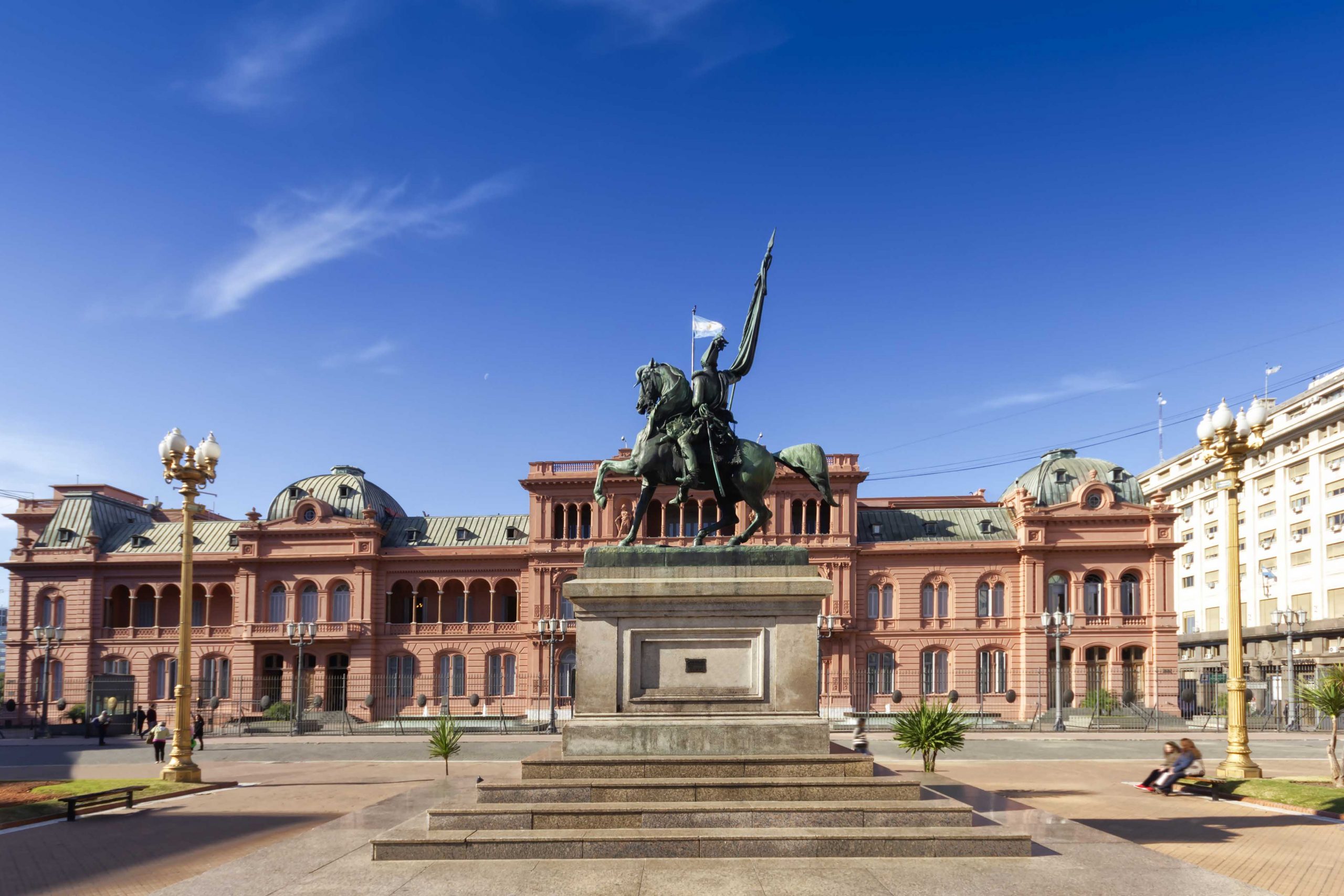 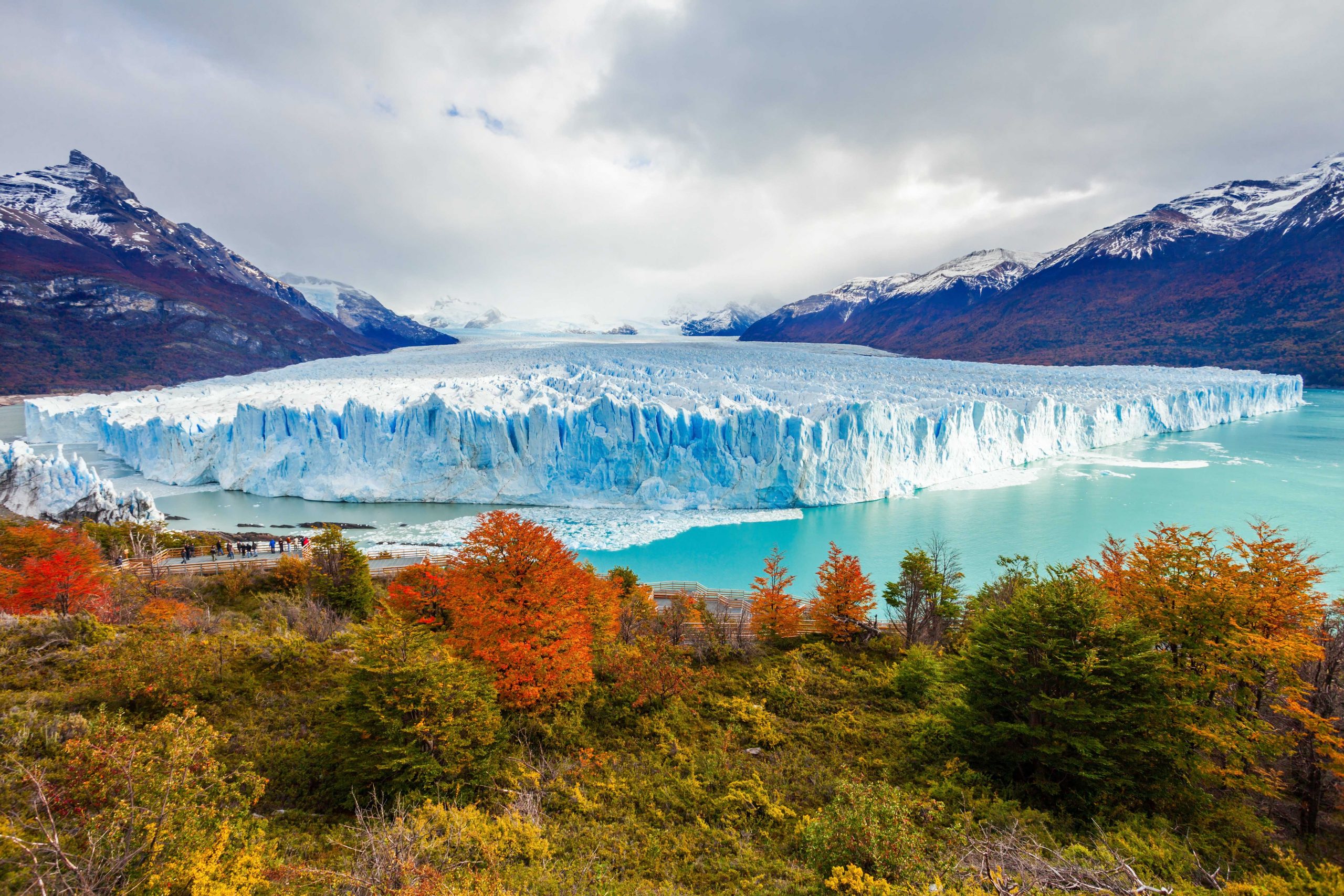 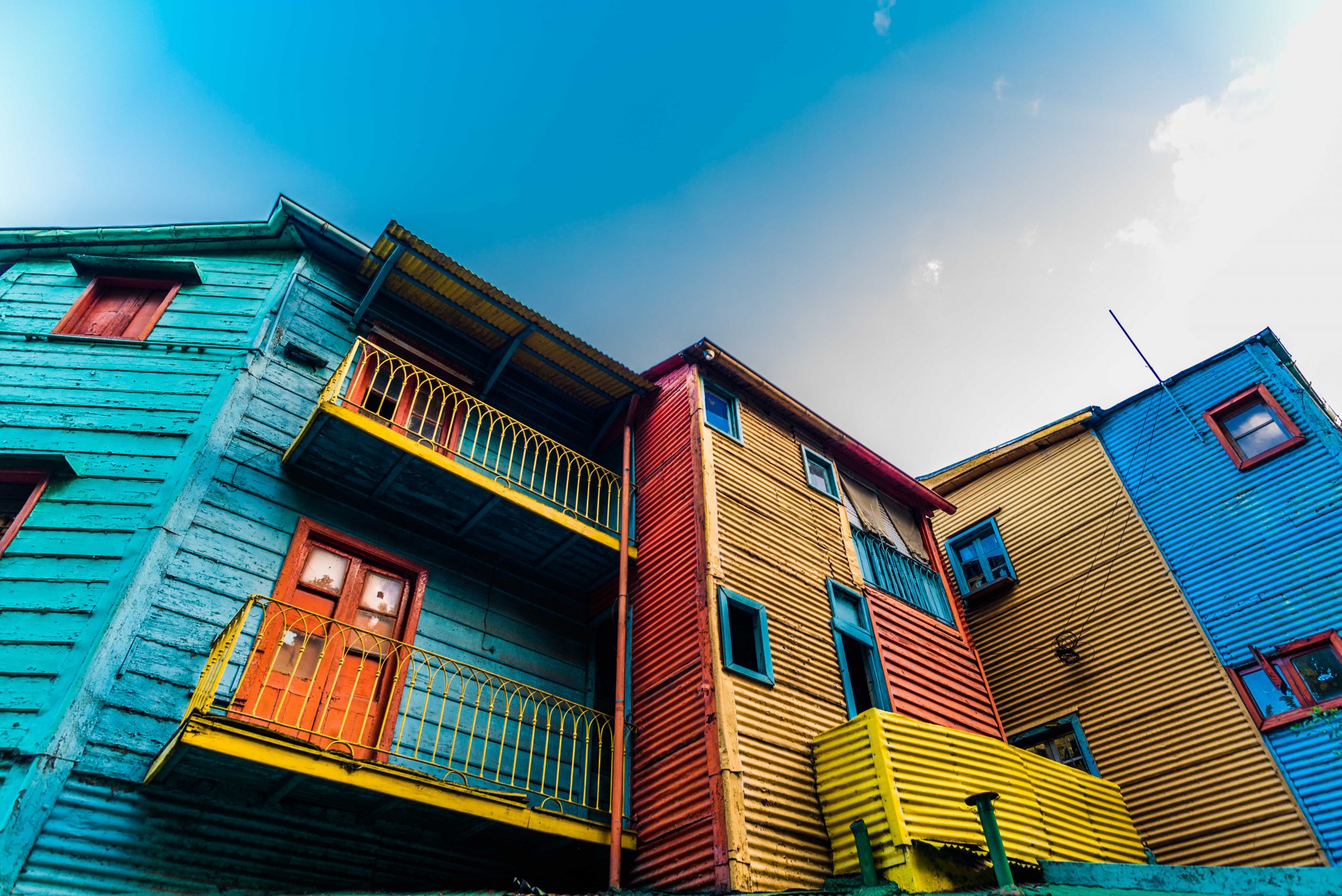 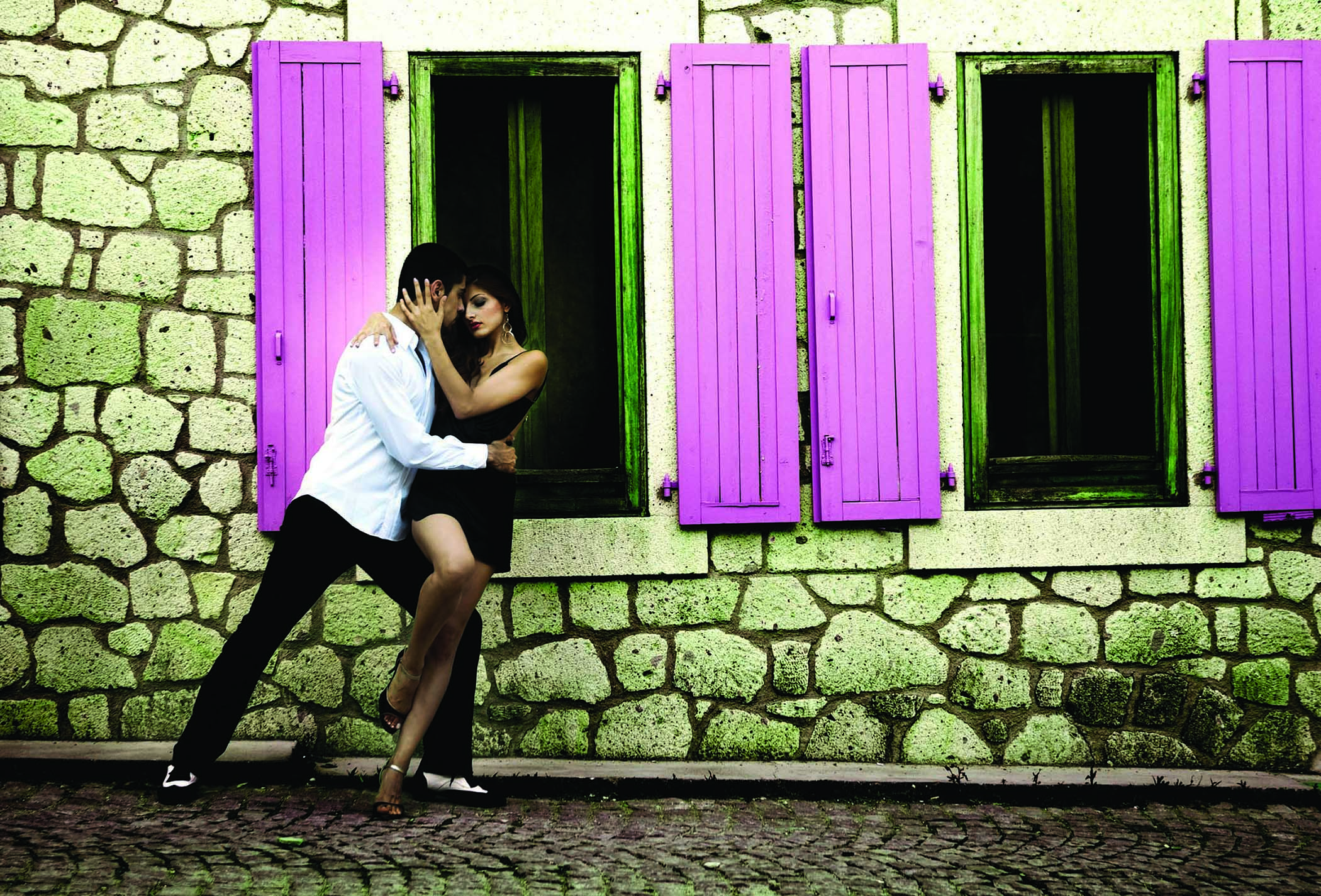 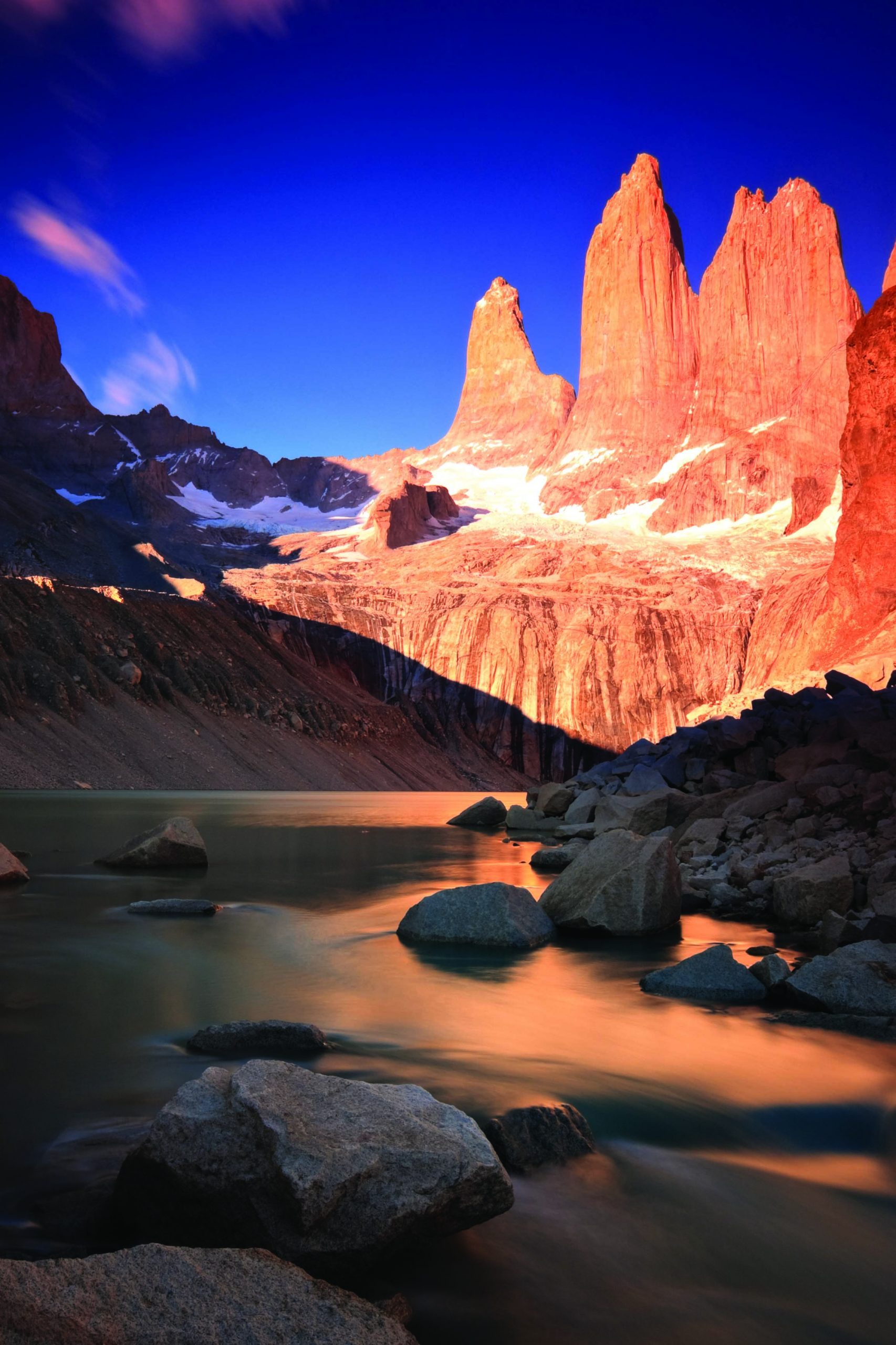 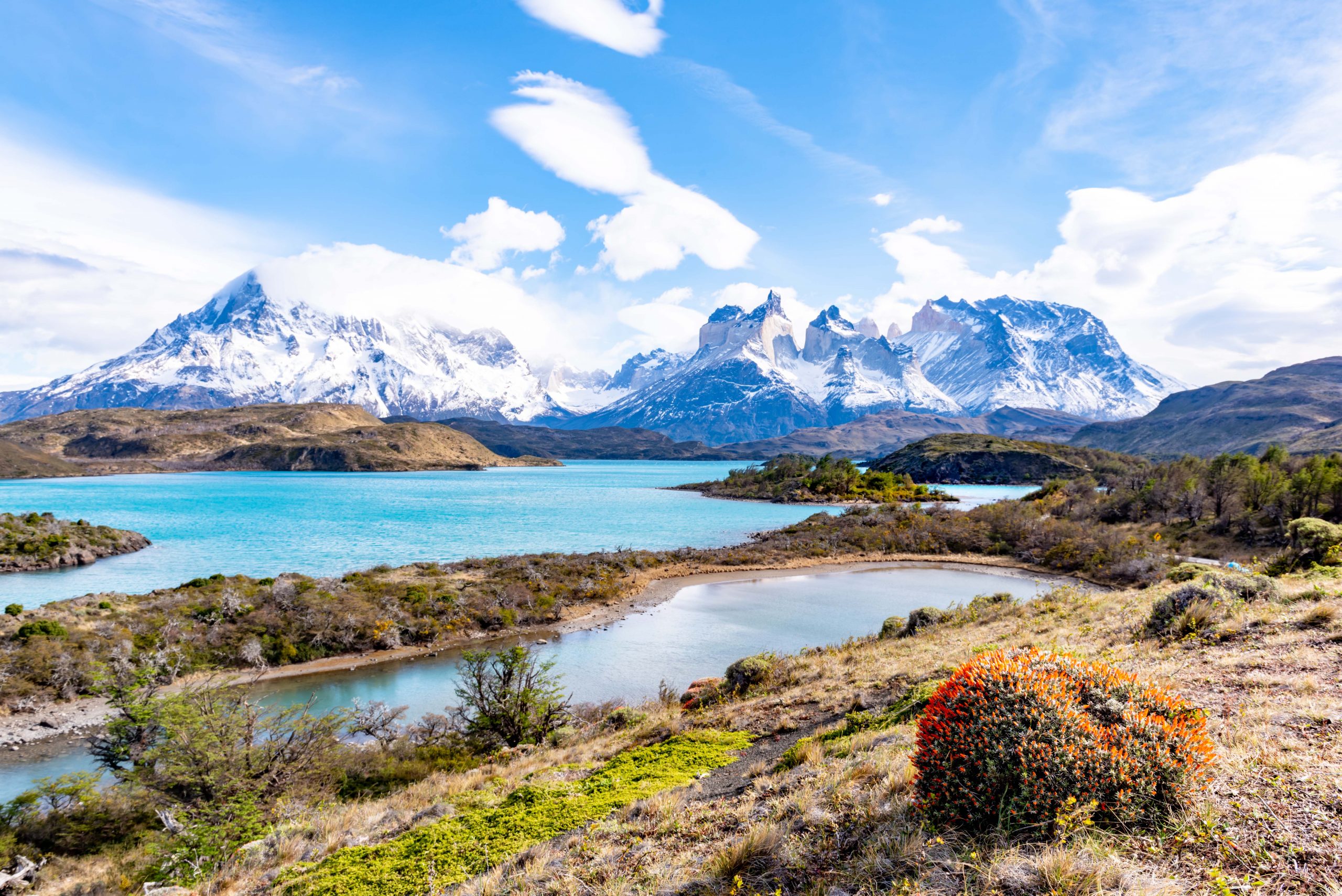 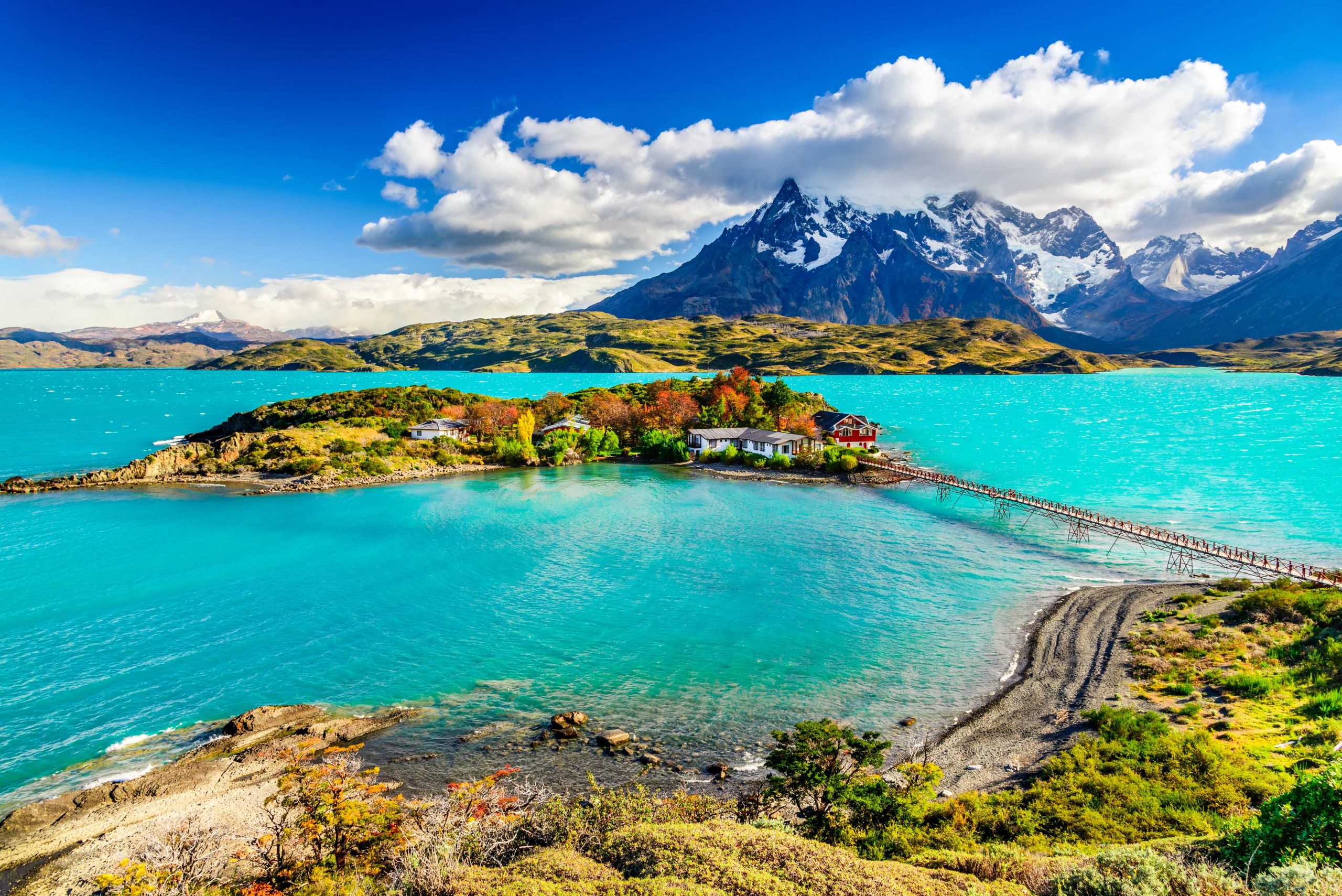 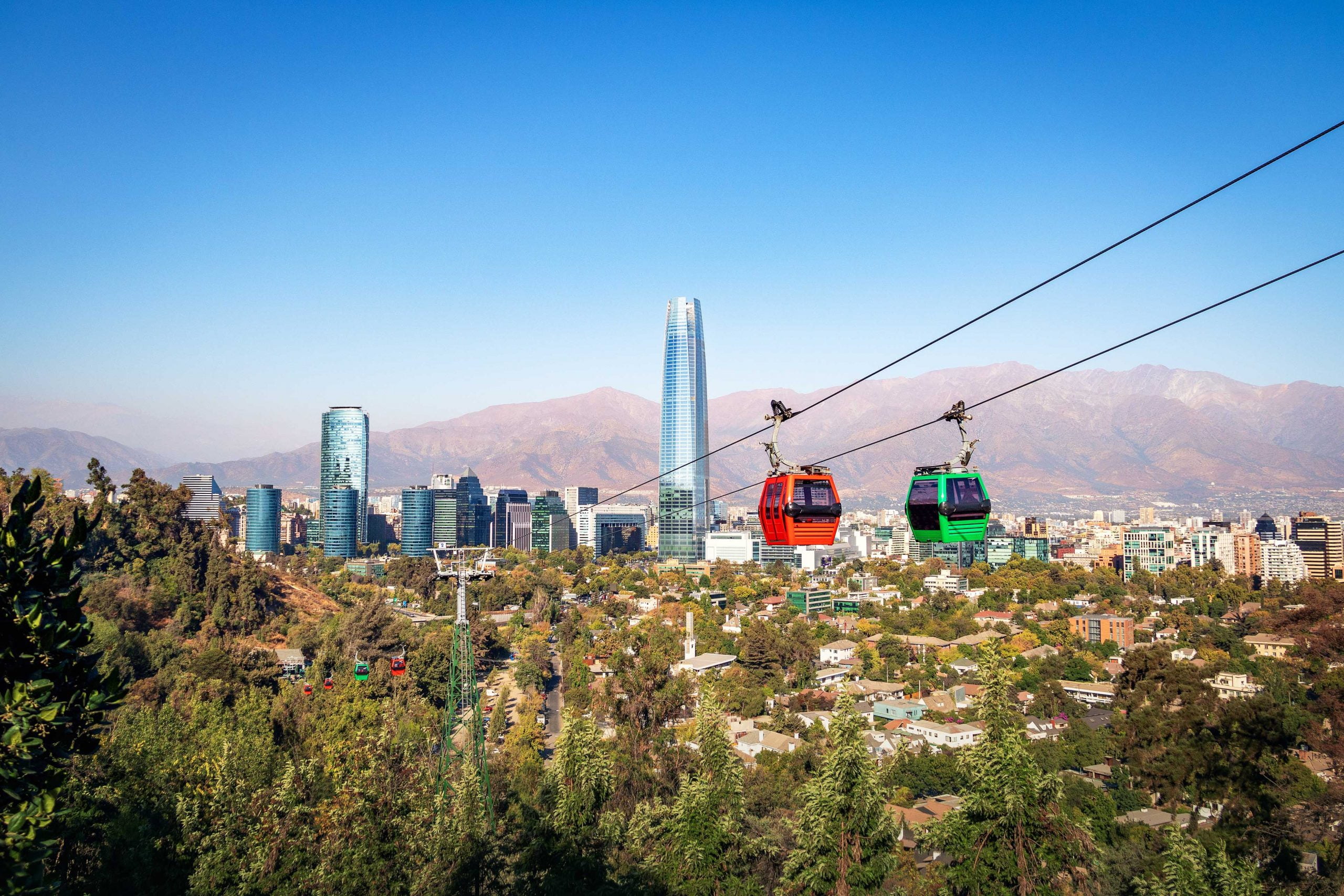 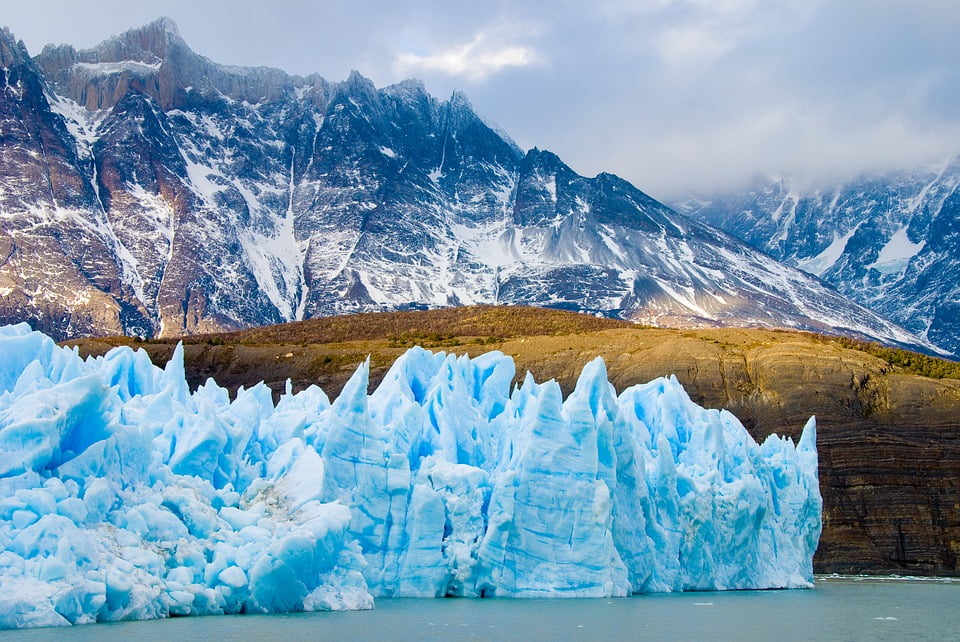 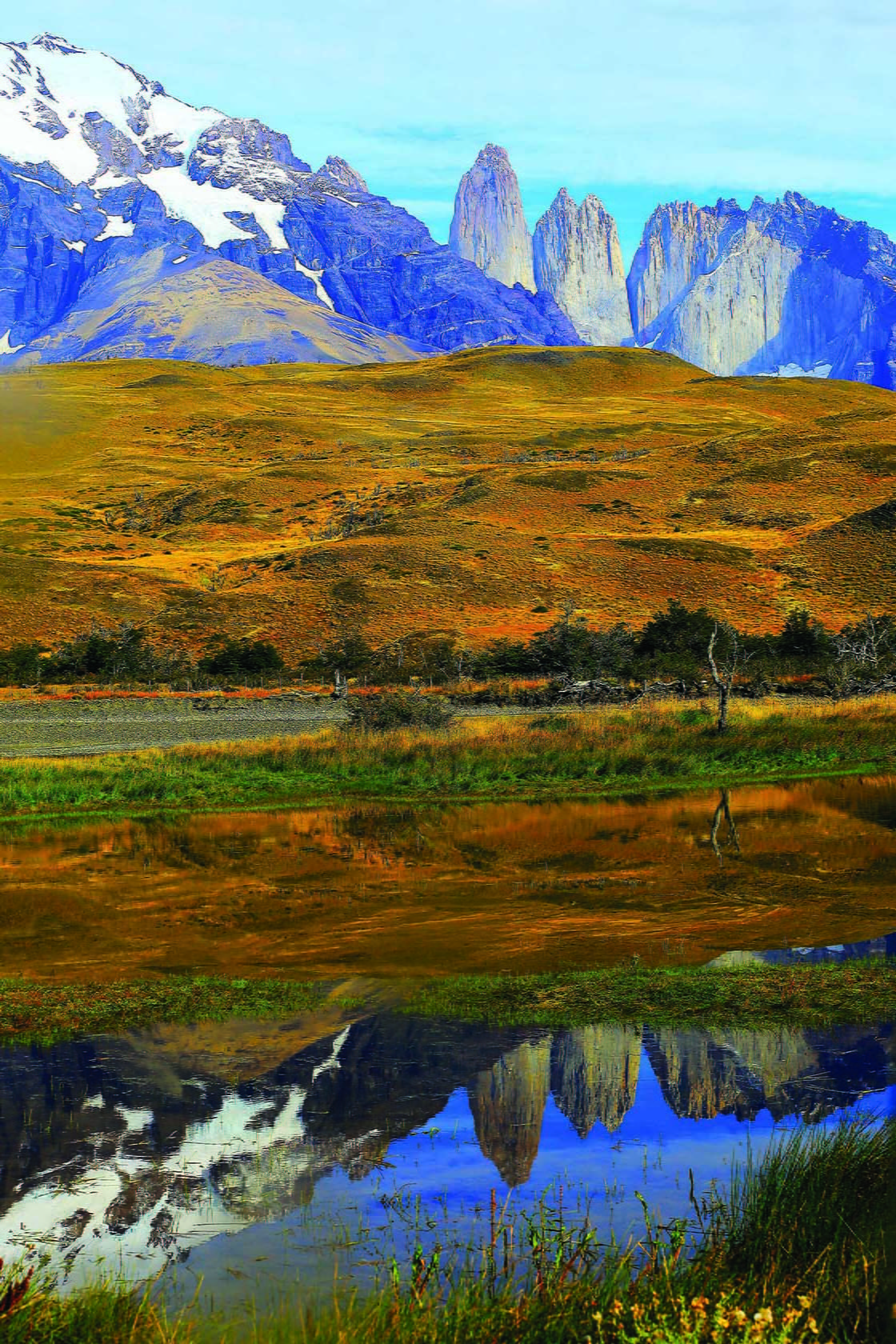