Country
Nepal
Duration
8 Days/7 Nights
Travel Type
Escorted Tours
Nepal is the land of mountains and monasteries. This landlocked country has the perfect fusion of nature and culture. Picturesque Himalayan range in the North, roaring rivers making their way through the hills to the plains, lush green paddy fields and quaint little villages everywhere. Nepal’s scenic beauty will leave a lasting image in your mind. Explore the land of mystics and mantras, and experience the adventure of a lifetime. Nepal definitely is the ultimate destination for those who prefer to stay closer to nature and immerse themselves in various cultures. From rugged trails to scenic views, from rafting on swollen rivers to sighting wild animals in their natural habitat, Nepal offers a rush of adrenaline for every nature-loving adventure seeker on its diverse array of landscapes. Considered as the mythical Shangri-La by many, Nepal also has a mystical side to it, dotted by medieval city squares, monasteries, and temples. Kathmandu Valley, the capital city, provides numerous World heritage sites, centuries-old stupas, and monasteries to experience centuries old civilization and architecture.

The driving times mentioned are approximate and do not include breaks in the journey for sightseeing, photo/tea/meal/rest stops. There may be delays in transfer time due to road conditions, road repair/widening works, inclement weather and other unforeseen circumstances.

Arrive in Kathmandu where you will be met by our local representative and transferred to your hotel. Spend your days strolling down the stone paved lanes leading to centuries-old temples, courtyards, and stupas. Kathmandu Valley is perfect for culture vultures with its architectural offering and spiritual feel. Afternoons create a perfect setting for long walks enjoying the mélange of the traditional old city and modern buildings. During the winters, snowy peaks of the Himalayan range will glitter from behind the curtain of mountains, making morning views a treat for your eyes.

Morning: Proceed for the visit to Kathmandu durbar Square KATHMANDU DURBAR SQUARE Durbar, which means palace, is where the kings were once crowned and where they ruled from. Kathmandu has its Durbar Square at its heart and was designated as a UNESCO World Heritage Site in 1979. The massive complex consists of three main squares, which is home to palaces, temples, and courtyard. South of Basantapur square is a former Royal elephant stable, which today has souvenir stalls and leads to Freak Street (the lane still lives in the former glory of being the ultimate Hippie destination during the Flower Power era). The temple of the Living Goddess, Kumari, is also on the southern end. Kumari is a young Shakya girl from Newar community, chosen through an ancient and mystical selection to become the human incarnation of Hindu Goddess, Taleju. If you are lucky, you might get to get a glimpse of Kumari peeking out of an elaborately carved wooden window. The main Durbar Square is the most affected area by the 2015 earthquake. Three main temples of the area, Kasthamandap, Narayan temple, Trilokya Mohan, and Krishna Temple has been completely destroyed, while others have been partially damaged. On the Northeast side, the square consists of Hanuman Dhoka, the main entrance to the old royal palace. The Taleju Bhawani’s temple, the oldest of all the temples is situated in this area. Even though the old royal palace has been partially damaged, restoration process is going on. Later: visit SWAYAMBHUNATH Perched on top of a conical hill is a white dome with glittering golden spire, visible from all sides of the valley for many miles. This most ancient and enigmatic of all the holy shrines in Kathmandu Valley. Swayambhunath Stupa, is also known as the Monkey Temple. According to the historical records, the stupa is over 2,500 years old. The surrounding of the stupa consists of a variety of shrines and temples, some dating back to the Licchavi period. This stupa too has been on the UNESCO World Heritage Cultural Sites list. This place offers an excellent view of the Valley. Though the temples around the stupa had some minor destruction and one of the temples beside the stupa collapsed during the 2016 earthquake, the process of reconstruction is ongoing. Afternoon: Proceed for the visit to Patan Durbar square PATAN DURBAR SQUARE Just 5 km south of Kathmandu is Patan, the city of artistry, which is one of the three Royal cities in the Valley. Connoisseurs of fine arts and architecture will be delighted with the city’s offering of various Buddhist and Hindu temples and over 1000 monuments boasting of the finest wood and stone carvings. The city is known for its rich tradition of arts and handicrafts such as metal statues and ornate architecture. The square is a mix of old Royal palace, artistic courtyards, and pagoda temples. Other main attractions are Krishna Temple, Bhimsen Temple and Golden Temple among others. Though Patan Durbar Square has faced destruction due to the earthquake, a full-fledged reconstruction process is going on and one can find traditional artisans busy with the process at a Chowk within the Museum.

Breakfast at hotel and depart for your drive to Pokhara. Pokhara is the third largest city in Nepal. It is the starting point for most of the treks in the Annapurna area. Pokhara is a remarkable place of natural beauty, situated at an altitude of 827m from the sea level and 200km west of Kathmandu valley. It is considered by many to be the most beautiful place. This enchanting city has several beautiful lakes and offers stunning panoramic views of Himalayan peaks. The serenity of lakes and the magnificence of the Himalayas rising behind them create an ambience of peace and magic. Pokhara spans 8 km from north to south and 6 km from east to west but, unlike Kathmandu, it is quite loosely built up and still has much green space. The Seti Gandaki flowing through the city from north to south divides the city roughly in two halves. The city offers a combination of nature and culture and is mostly known as the gateway to the trekking route ”Round Annapurna”.The major touristic attractions of Pokhara are its scenic views in and around town, Phewa Lake, Begnas Lake, Rupa Lake, World Peace Pagoda (Shanti Stupa), Davi’s fall, Sarangkot, Gupteshwor cave, Mahendra cave, International Mountaineering Museum etc.

Morning: Proceed for the visit to Kali Temple or Bindabasini temple Bindabasisni temple Visit / Kali Temple Kali Temple or Bindhyabasini Mandir is of great religious importance to Hindus living in the Pokhara region. It is a vital hub of religious fervor. The temple itself is dedicated to the Hindu goddess Durga, who is Pokhara's chosen guardian deity. Durga, also known as Shakti or Kali has numerous manifestations and at the Bindabasini temple she is seen as Bhagwati, a blood-thirsty aspect of the goddess. Devi’s fall: Devi's fall (also known as Devin's and David's) is a lovely waterfall lying about 2-Km south-west of the Pokhara airport on the Siddhartha Highway. Legend has it that a trekker (Devin, David) was washed away by the Pardi Khola and mysteriously disappeared down into an underground passage beneath the fall. Across the road from Devi’s fall, this venerated cave contains a huge stalagmite worshipped as a Shiva lingam. The ticket allows you to clamber through a tunnel behind the shrine, emerging in a damp cavern adjacent to the thundering waters of Devi’s fall. Boat Ride at Phewa Lake: The centre of attraction in Pokhara is Phewa Lake - the second largest lake in the Kingdom. It is the largest and most enchanting of the three lakes that add to the resplendence of Pokhara. Here, one can sail or row a hired boat across to the water or visit the island temple in the middle. The favourite home base for travellers is the eastern shore.

Breakfast at hotel and depart for your drive to Chitwan Chitwan National Park. It is the first national park in Nepal. Formerly called Royal Chitwan National Park, it was established in 1973 covering 932 sq km area and granted the status of a World Heritage Site by UNESCO in 1984. It is located in the subtropical Inner Terai lowland of south-central Nepal. In altitude it ranges from about 100 m in the river valleys to 850 m in Churia hill. This park is 165 km from Kathmandu. This National Park is home to over 50 species of mammals, 55 species of amphibians and reptiles and 525 species of birds. Wildlife that thrive here include; the great one-horned Asian Rhinoceros, Gaur, wild Bison, sloth Bear, four different species of Deer, the Rhesus Monkey and the black-faced Languor, the spotted Leopard, Royal Bengal Tiger, the fish-eating Gharial, the flesh-eating marsh Crocodile and the Gangetic Dolphin among many others. The birdlife too is very rich and varied and a delight for Ornithologists. Arrive & refreshment drink and briefing about the accommodation and the facilities.

Accommodation : 2 nights in Chitwan at the Lodge

Early morning guests will be taken for a jungle safari for 2-3 hours penetrating through dense grasslands to view wildlife in their natural habitat. This grass commonly known as elephant grass is dense and grows to a height of 18-20 ft. It is the favorite habitat for rhinoceros and other mammals. After breakfast, you are taken to elephant stables where a senior naturalist briefs about the interesting and unbelievable habits of elephant. Here one may witness the rare scene of the elephants at bath. In the afternoon you may choose to relax around the resort or you may also feel like going for a nature walk or birding with one of our naturalists to know more about the flora of the Chitwan National Park. Those on canoe ride are taken back to the resort/ Lodge. (Note: Jungle activities is subject to change due to weather condition).

Later this morning drive to Kathmandu. Check in to your hotel. Rest of the day at leisure.

Check out and transfer to airport to take your flight back home. 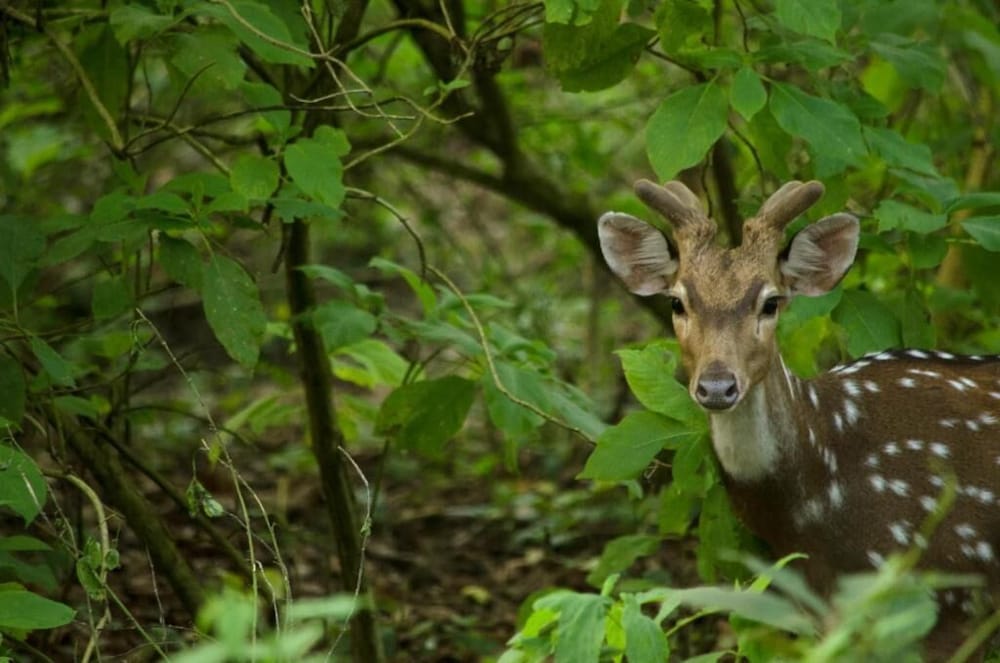 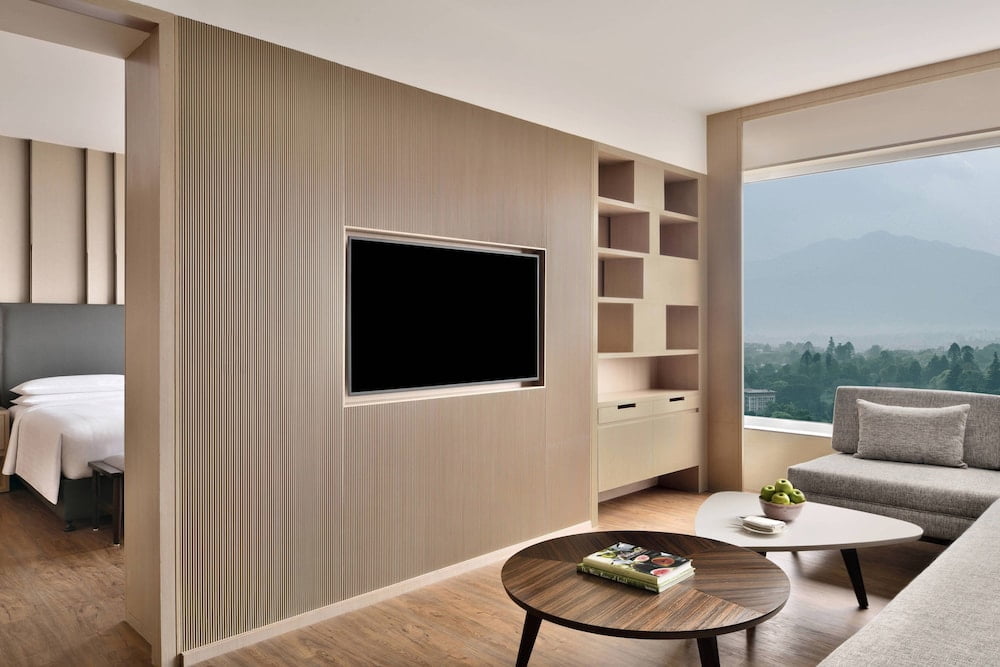 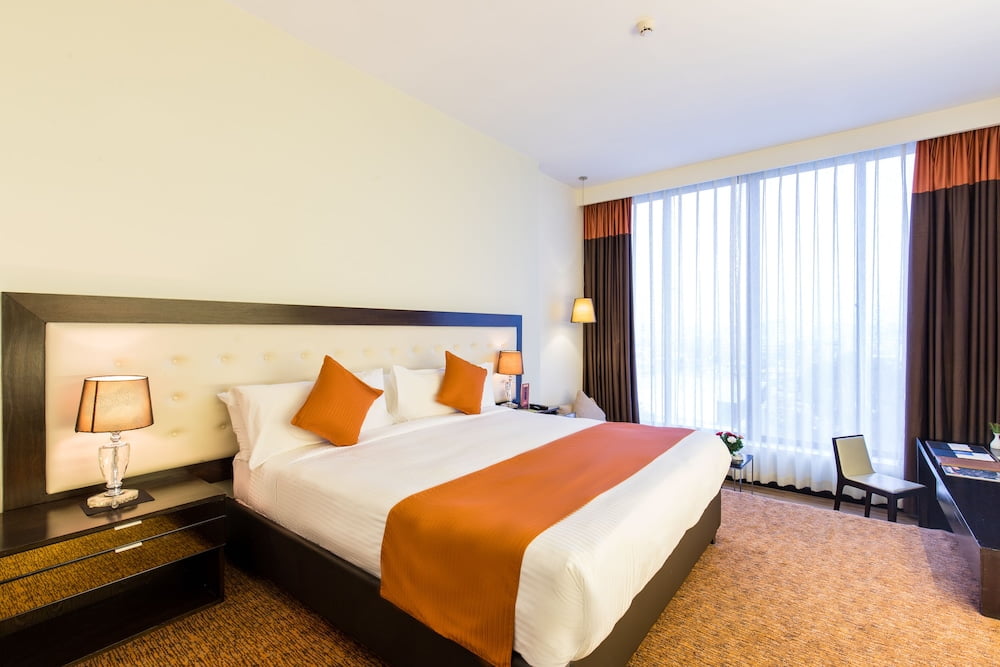 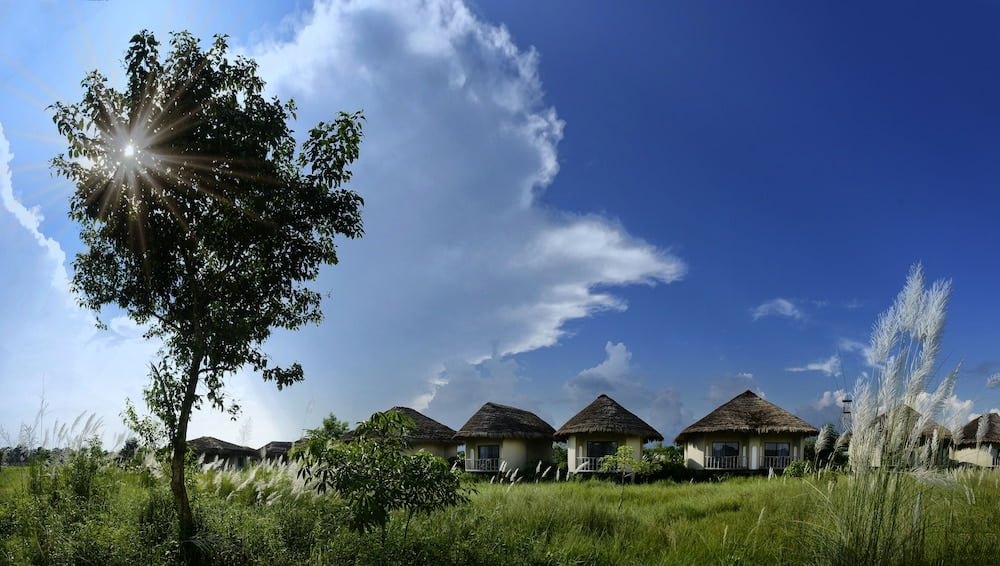 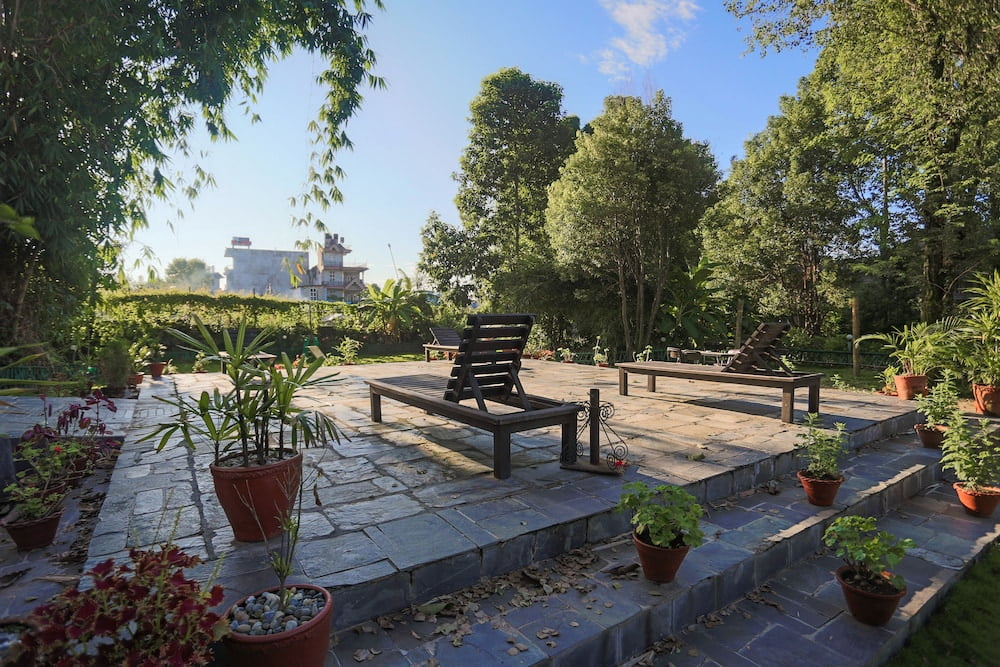 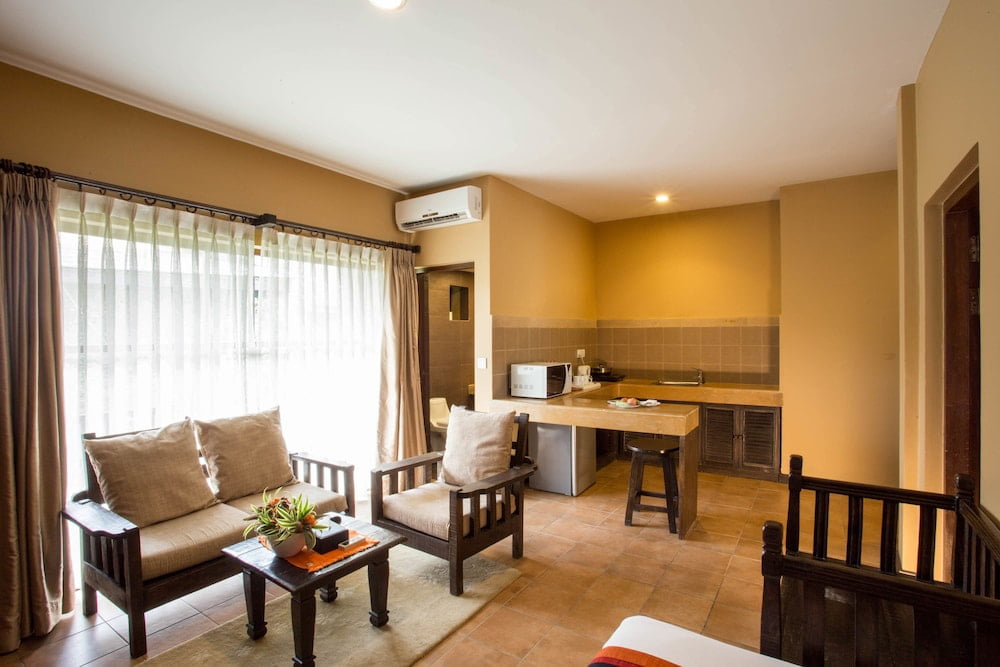 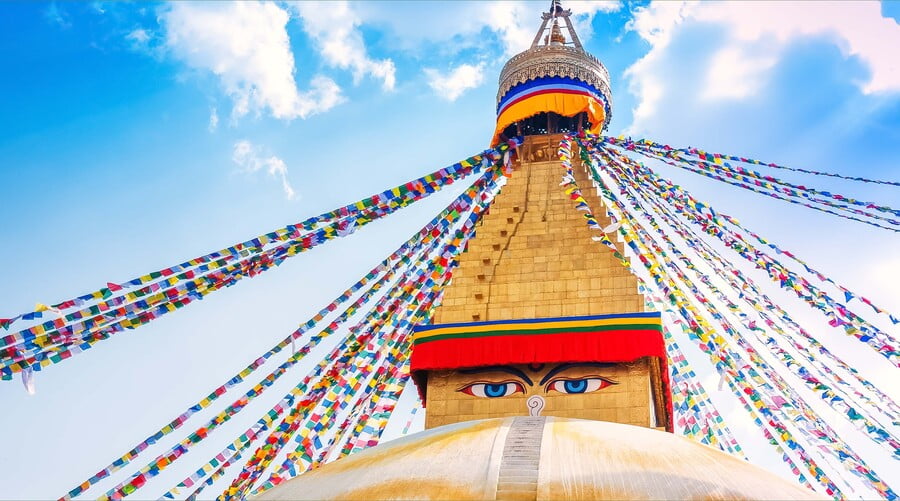 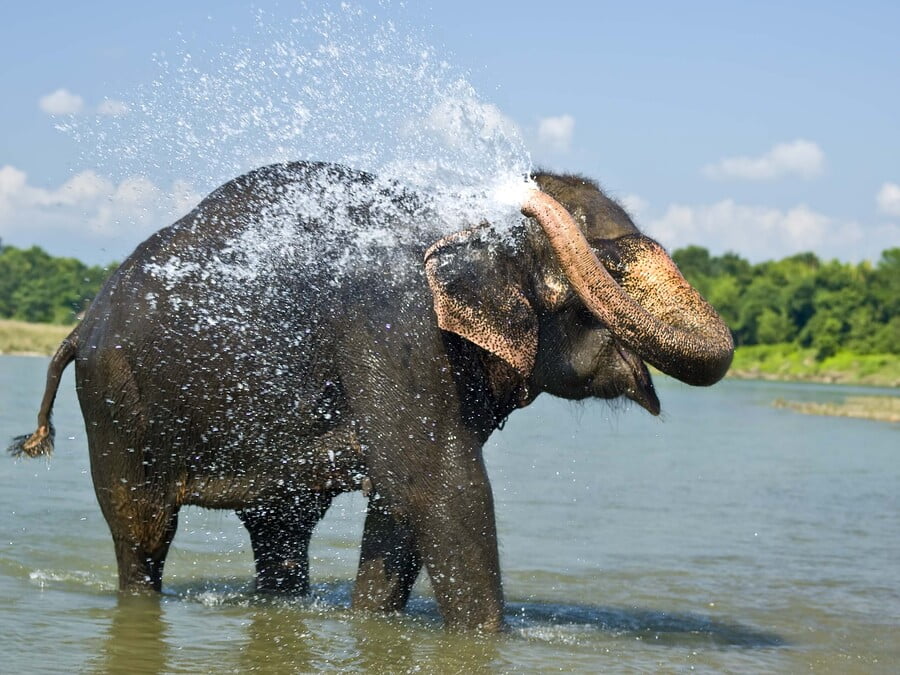