Not included:   – Flights ,  seat selection not permited in group space –  gratuities – meals not mentioned in itinerary – beverages – hotel tax to be paid upon check-in at each hotel , Special stay  tax- Travelers are required to pay a daily room tax at each hotel upon checkout. The tax amount is 1.5€  per room per night  total approx. 30 €

Final payment – 50 days prior  to departure

Greece is waiting for you !

Departure from Canada – Flights with AC from Toronto
2

Upon arrival in Athens Airport , meet your driver and transfer to the Marathon Beach(30 KM) Accommodation: Marathon Beach resort for 20 nights with daily breakfast
3-21

On May 3rd, you will meet the Exotik representative. he will present the destination , the souroundings, restaurants arounds, public transportation and explain all the optional excursions available ( $) . (B)
22

After breakfast, transfer back to Athens airport for flight back home. (B)

On May 3rd:   our Exotik representative will organize a Group meeting and explain everything about the resort, the surroundings, the restaurants and activities nearby , the public transportation and all about the optional excursions available ($) during your stay in Greece. Below , find some Excursions you could book while on site – price  will be provide 1 month prior to departure according of the number of participants. 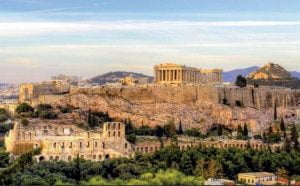 Athens City tour with new Acropolis Museum This tour gives you an opportunity to observe the striking contrasts that make Athens such a fascinating city. Visit the Panathenaic Stadium where the first Olympic Games of modern times were held in 1896 (short stop). Continue and pass by the Temple of Olympian Zeus, the Hadrian’s Arch, the Parliament and the memorial to the Unknown Soldier, the Academy, the University, the National Library, Constitution Square (Syntagma). On the Acropolis visit the Architectural Masterpieces of the Golden Age of Athens: The Propylaea, the Temple of Athena Nike, the Erechtheion and finally “the harmony between material and spirit”, the monument that “puts order in the mind”, the Parthenon. Continue and visit the place where at last the statues found their home and admire the wonders of the classical era: The new Acropolis museum.   Argolis Leave by the coastal road along the Saronic Gulf to the Corinth Canal, which connects the Aegean Sea with the Ionian Sea, (short stop). Drive to Mycenae, the Homeric city of Atreides, the city “rich in gold” of the ancient poets. Visit the Lion’s Gate, the Cyclopean Walls, and the Royal Tombs e.t.c.. Depart for Nafplion through the fertile plain of Argolis, the picturesque town nestling at the foot of a cliff crowned by the mighty ramparts of the Palamidi Fortress (short photo stop), leave for Epidaurus, to visit the Theatre (4th century B.C.) famous for its astonishing acoustics. Return to Athens by the National road connecting Epidaurus with Corinth. Lunch in Mycenae   Cape Sounio Drive along the coastal road, passing the wonderful beaches of Glyfada, Vouliagmeni & Varkiza to the most Southern point of Attica, Cape Sounion, where the white marble pillars of the Temple of Poseidon stand. On the way, you have a splendid view of the Saronic Gulf and the little islands offshore. After visiting the temple of Poseidon, you have time to walk at leisure on the rocky promontory of Sounion. 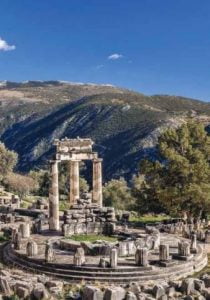 Delphi Drive through the fertile plain of Beotia, crossing the towns of Thebes connected with the tragedy of King Oedipus – Levadia and Arachova (short stop on the way back). Arrive at Delphi, the center of Ancient World – the “Omphalos” (Navel of Earth) – whose prestige extended far beyond the boundaries of the Hellenic World. On the slopes of Mount Parnassus, in a landscape of unparalleled beauty and majesty, lie the ruins of the Sanctuary of Apollo Pythios. Visit the Treasury of the Athenians, the Temple of Apollo and the Museum containing such masterpieces of Ancient Greek sculpture as the bronze Charioteer and the famous athlete Aghias. Lunch in the modern village of Delphi, return to Athens by the same route. One day cruise We depart at 08.00 a.m. heading to the three beautiful islands of the Saronic Gulf. After departure, our guide and the hostesses will ask you to assemble in one of the main lounges of the ship to get acquainted and to give you all the information concerning the ship, the program of the cruise and the islands and to make sure you will have a to have a pleasant day. Hydra: The favorite island of the jet set, whose old traditional beautiful stone houses and mansions silently witness to a long and turbulent story. The small narrow stone paved streets await you to explore them on foot or by the island’s traditional “vehicle” the saddled donkeys… captivating walks along the old seaside promenade crystal clear waters, radiant fine craft shops and the beauty of Hydra will conquer you! Our stay in Hydra is about 2 hours. Poros: Although it is the smallest of the three islands that we visit, its attraction is the narrow strait offering a most enchant-ing view of the town of Poros. Our stay in Poros is about 1 hour. Aegina: The largest of the three islands. Apart from its harbor, there are optional organized tours by air conditioned busses visiting the Temple of Afea (archeological site) or the Church of Saint Nektarios, whose relics are display. The above mentioned tours are optional and are sold on board the ship. Our stay in Aegina is about 2 hours. On our way back to Marina Flisvos, a traditional Greek folk show with singers and dancers will entertain you up to the final moment as the ship arrives at Marina Flisvos

Marathon Beach Resort is approx. 30 KM from Athens and it is a legendary destination hotel of the ’70s, ’80s and ’90s in Nea Makri, has recently been reborn. Situated in one of the most beautiful locations in the historical area of Marathon, just steps away from Nea Makri beach and marina, Marathon Beach Resort is an ideal choice. The three wings of buildings surround the gardens with palm trees and bougainvilleas and offer direct access to the swimming pool area, restaurants, bars and shops. It is an ideal vacation spot. In a close distance from Athens and the International Airport, Marathon Beach Resort is the perfect choice for those looking for family – friendly accommodation, romantic getaways, and a place to host a business meeting or a memorable event. The beach is at 50 m from the hotel. It is a public beach where they have chairs and umbrellas (at a charge).  There is also a beach bar on the spot. Nea Makri is the main town of the Municipality of Marathon.  It’s a medium sized town situated on the eastern Attica coast a few kilometers north of the port of Rafina.  Attica is the region (prefecture) of mainland Greece that includes the city of Athens.  A few kilometers to the north is the small town of Marathon, famous for its ancient battle and the associated long distance road race.  Various taverns lie within proximity. DISTANCE FROM: Rafina Port, 7 km Athens, 32 km Athens International Airport, 24 km

Hotel facilities (some with fees)

FACILITIES (some with fees)

• Shops On the ground floor of the main building our guests can visit our shops          with gifts, souvenirs and clothes, that are open till late at night 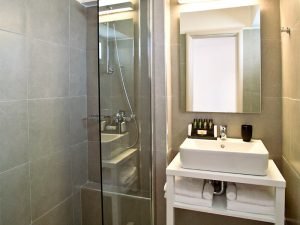 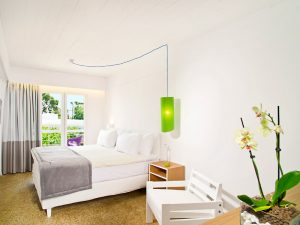 All Superior Double rooms at Marathon Beach Resort are designed with simplicity, yet elegance providing the guests a comfortable stay. All rooms have their own furnished balcony or veranda and overlook the pool area, the gardens or the sea. The standard room (for single usage) features a double size or twin comfortable beds and bathroom with shower. The superior rooms are scattered into 2 buildings. 12 rooms are on the first building (6 on 1st floor & 6 on 2nd floor) and they enjoy garden & sea view. 18 rooms are on the second building ( 7 on ground floor with garden & pool view, 7 on the 1st floor with garden & pool view and 4 on 2nd floor with garden, sea & pool view). The rooms have a minimal decoration with new furniture and a small sitting area with a table and 2 chairs, an open closet, a mini-bar $ and a safety deposit box. * The hotel does not have an elevator** 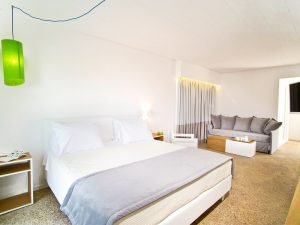 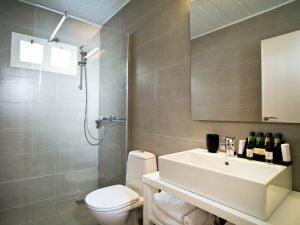 All of our Junior Suites are spacious with an elegant touch. The Junior Suite features a queen size comfortable bed and a sitting area with a large sofa that can be used as an extra bed for a third adult or a child. Junior Suites have bathroom with bath tub or shower and furnished balcony with views to the pool and the gardens. Guests of Junior Suites also enjoy the privilege of extra amenities, such as bathrobes, reserved sunbeds and umbrella by the pool and private car parking. King size bed (180×200) 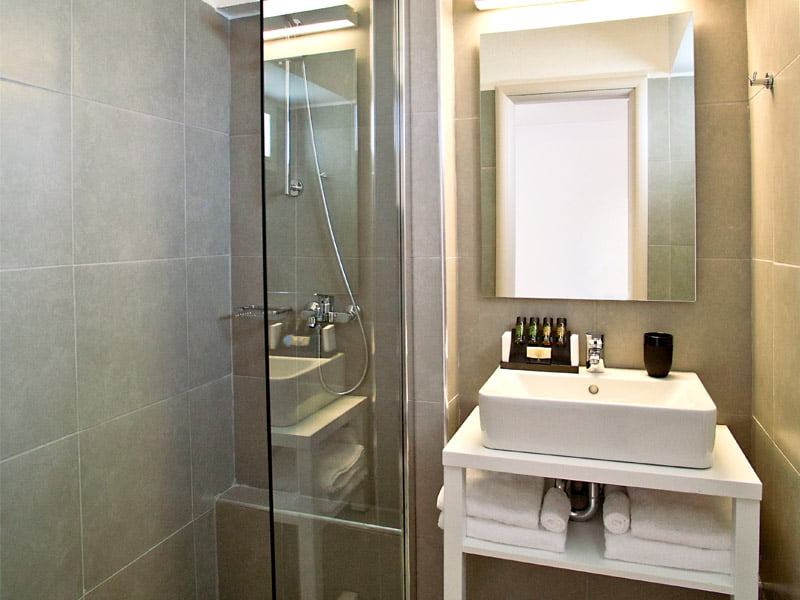 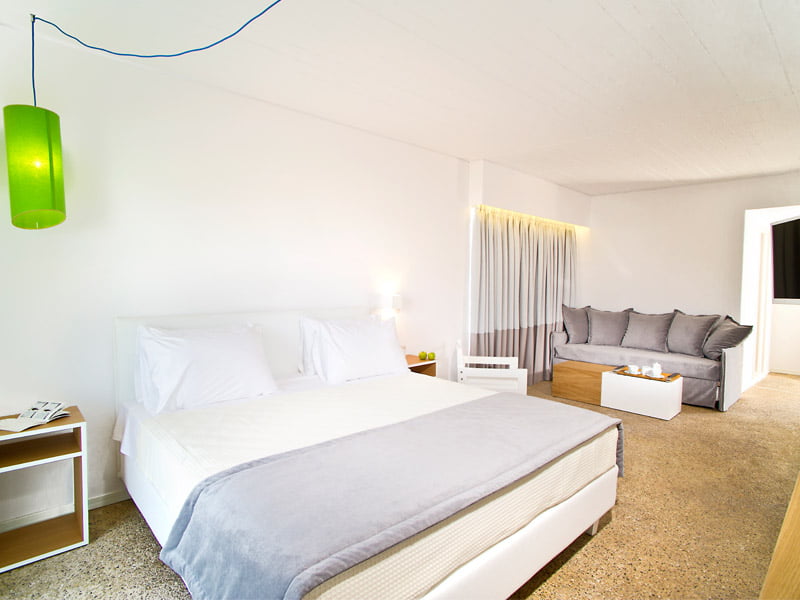 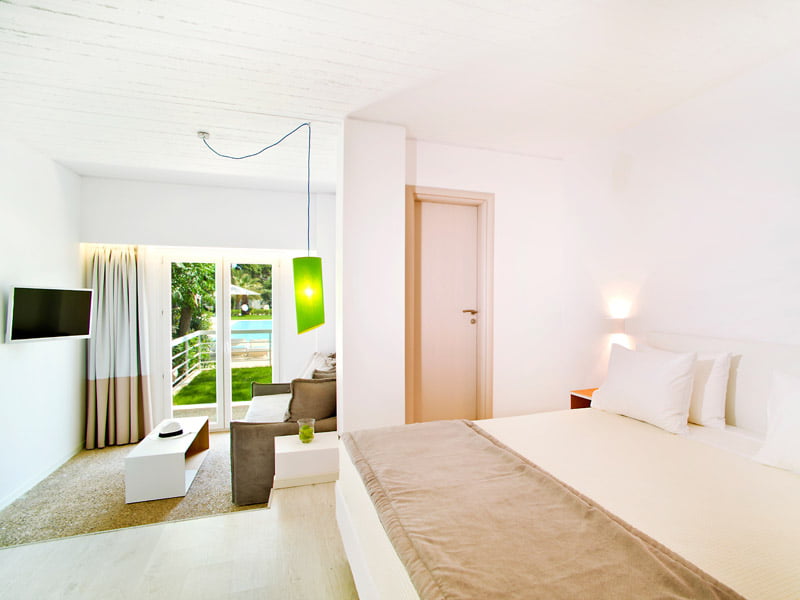 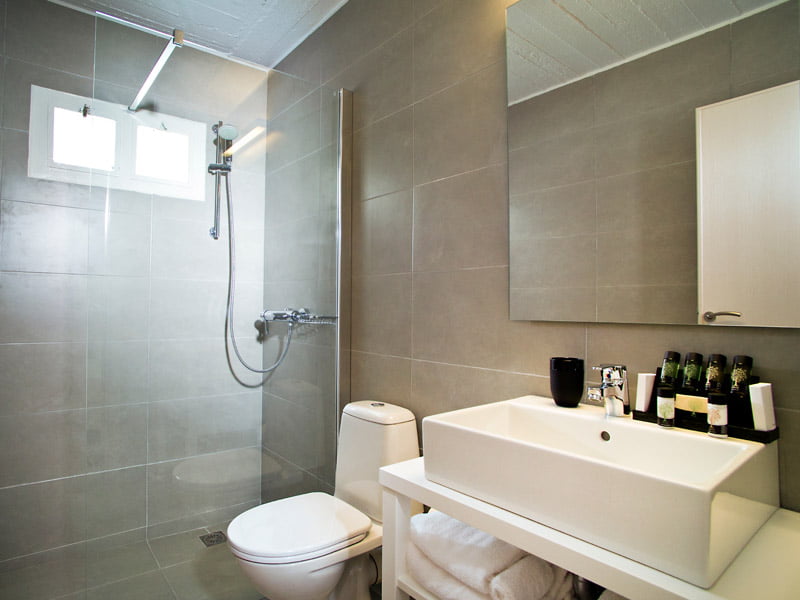 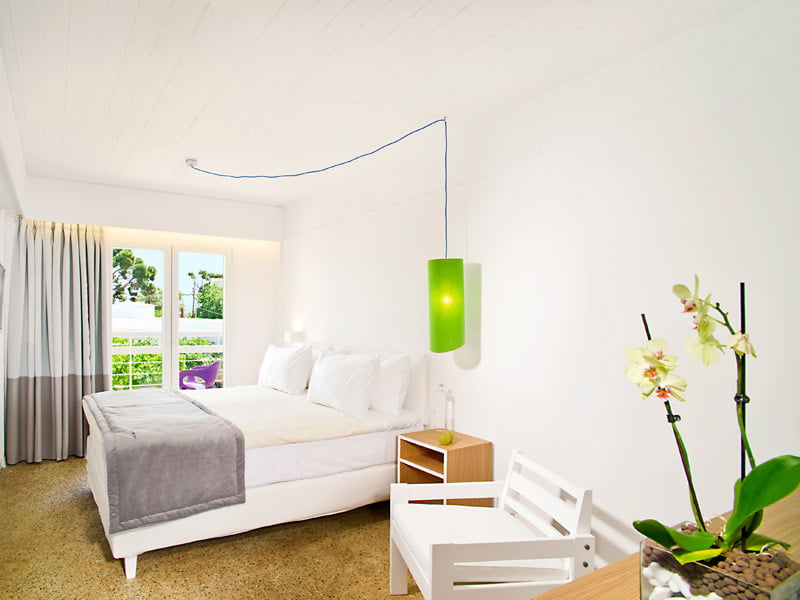 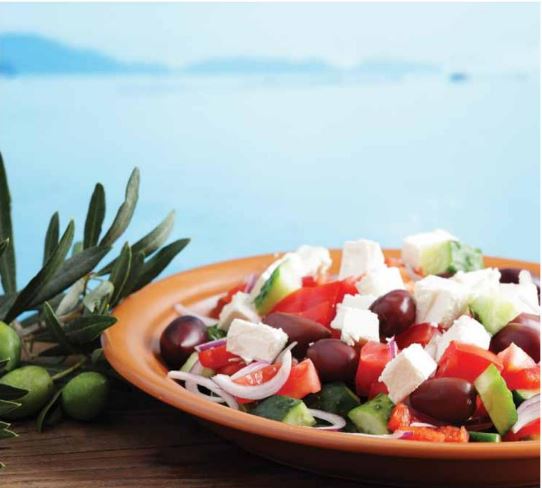 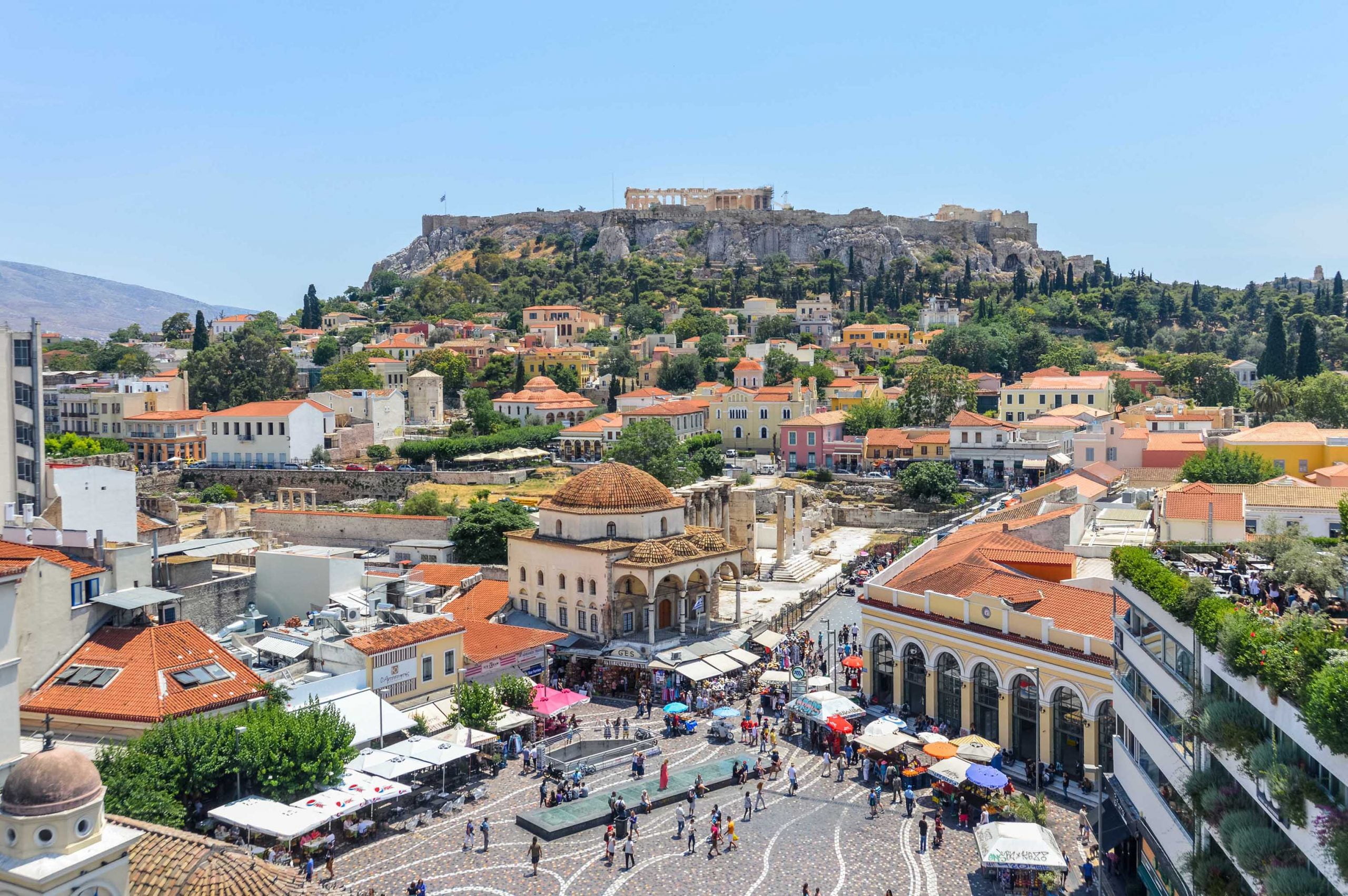