Combine Kenya and Tanzania for the ultimate safari experience.

Not included · International or domestic airfare· Electronic visa for Kenya ($), must be obtain online prior departure at www.evisa.go.ke and E-Visa for Tanzania ($)  https://eservices.immigration.go.tz · Gratuities to hotel personnel, guides and drivers · Optional excursions.

Upon arrival in Nairobi, transfer to your hotel. Driving time: 22 Km – 30 minutes subject to traffic in Nairobi Accommodation: Nairobi for 2 nights
2

After a good night rest and breakfast at the hotel, depart for a guided city tour of Nairobi. Visit Karen Blixen and Giraffe center and lunch at the Karen Blixen Coffee Garden. Return to the hotel in the afternoon and rest of the day at leisure. This evening transfer to the world famous restaurant, the Carnivore, for a welcome dinner. (B/L/D)
3

Traverse the Rift Valley and ascend its western rim into the Masai land. Red-clad, with spear Masai warriors tend their herds of cattle among the wildlife, admirably unmoved by the presence of large predators. Lunch at the camp and continue on an afternoon game drive in search of wildlife. Return back at your camp at sunset in time for dinner. (B/L/D) Distance: 270 Km – Driving time 4 ½ hours Accommodation: Masai Mara for 2 nights
4

Full day in the Mara with morning and afternoon game drive in this spectacular game reserve, all with superb photographic opportunities. The most spectacular feature is the annual migration of wildebeest, zebra and gazelle from the plains of Serengeti that cross the Tanzanian border and rivers to reach the Mara’s grasslands from late June, tracked by predators: lion, leopard, cheetah, hyena and circled by vultures as the journey unfolds. Apart from the seasonal migration, game viewing is excellent year round. Game includes: – elephant, Black Rhino, buffalo, wildebeest, Burchell’s zebra, hartebeest, various antelope and gazelle, lion, leopard, giraffe, elephant cheetah, hippo, crocodile and much more. During one of the game drive, you will visit a cultural Masai Village where you will experience for yourself the local masai and their traditional lifestyles. (B/L/D)
5

Today say good bye to the Mara plains and drive toward the Great Rift Valley to Lake Nakuru National Park. After lunch take an afternoon game drive. Created in 1961, Lake Nakuru National Park is situated in a wonderland which lies in the heart of one of Kenya’s most densely animal populated wetland national parks and in the midst of some of the most exciting scenery seen anywhere in Africa. Return to the lodge at sunset in time for dinner. (B/L/D) Distance: 325 km – Driving time: 5 hour Accommodation: Lake Nakuru for 1 night
6

After breakfast, departure through Nairobi and continue over the Athi Plains, and enter Amboseli National Park, situated at the foot of the impressive snow-capped peak of Mt. Kilimanjaro, Africa’s highest mountain at 19,340 feet. Drive to the lodge with a game drive en route. (B/L/D) Distance: 410 Km – Driving time: 5 hours Accommodation: Amboseli National Park for 2 nights
7

Breakfast at your lodge. Morning and afternoon game drives to view wildlife against the backdrop of Mt Kilimanjaro. The park offers a wide variety of wildlife but the principal attraction is its vast herds of elephant within the park. The bull elephants here have some of the largest tusks in Kenya. Other game includes: zebra, wildebeest, giraffe, impala, leopard, caracal and serval cat. The park boasts a rich bird life such as ibis, egret, avocet, common and saddle-billed stork, secretary bird, heron, vultures, ducks, and geese. (B/L/D)
8

After breakfast transfer to the Kenya/Tanzania border town of Namanga. Clear customs and immigration formalities on both sides of the border and continue to Arusha for lunch. After lunch, drive to your lodge situated in the Ngorongoro conservation area. The crater covers over 250 square kilometers (over 100 square miles) of land and is the home of the rare black rhino, prides of lion, elephant, cheetah and great herds of buffalo, antelope and wildebeest. (B/L/D) Distance: 405 Km – Driving time: 6 hours with a break of the journey in Arusha for lunch Accommodation: Ngorongoro for 2 nights
9

Today drive to the park gate and descend 600m (0ver 2000 feet) to the floor of the crater for a half day crater tour. Explore the forest areas that are inhabited by monkey and elephant, the lake area, where you may see the flamingos and the open savannah where the lions hunt for food. Return to the lodge for lunch. Afternoon is at leisure. (B/L/D)
10

After breakfast drive via Olduvai Gorge, site of Louis and Mary Leakey’s renowned archaeological discoveries. Their findings include some of the man’s earliest known ancestral remains. After a guided tour of the site, continue to Serengeti National Park with a game drive en route. This enormous park supports every varie ty of animal imaginable, from large predators such as lion, leopard and cheetah to the smaller herbivores they prey on. (B/L/D) Distance: 180 Km – Driving time – 3 ½ hours Accommodation: Serengeti for 2 nights
11

Breakfast at your lodge. Morning and afternoon game drives. More than two million wildebeest, Thompson’s gazelle and zebra gather during the migration, attracting a great deal of attention from their predators such as lion, hyena, cheetah and leopard. (B/L/D)
12

Breakfast at your lodge. Depart for Lake Manyara National Park through Ngorongoro and arrive at the lodge in time for lunch. Afternoon game drive in this park, famous for its prolific bird-life and other inhabitants such as hippos, monkeys, tree climbing lion s. (B/L/D) Distance: 250 Km – Driving time: 4 ½ hours Accommodation: Lake Manyara for 1 night
13

After breakfast drive to Arusha, make a shopping stop at the Arusha cultural center before proceed to the Arusha Hotel for lunch. Transfer to airport. (B/L) Distance: 135 Km – Driving time 2 ½ hours 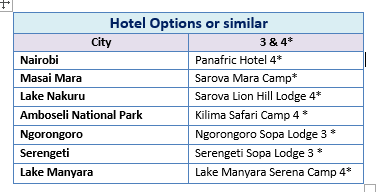 **Prices in this document are for information only; they were issued at press time, for the current year. Please note that due to exchange rates and temporary promotions, they can increase or decrease at any time. Contact your travel agent for the price and promotion of the moment The prices indicated exclude the contribution to the Customer Compensation Fund of $3.50 per $1,000 of tourism product or service purchased from a travel agent in Quebec.
$8,099
Starting from, per person
PRIVATE TOUR