A unique family experience where the whole family can interact with each other in unique environment while enjoying the fun and adventure of Safari. The first nightisspent in Nairobi. On the second day you will have an opportunity to meet the baby elephants and the rare giraffes. You can feed the giraffes from the balconies. The following day, drive to Sweetwaters famous for its Chimpanzee sanctuary and the friendly rhino called ‘Morani’. Drive to Samburu Game Reserve set in the rugged northern region of Kenya. Wildlife here is not found in many other Kenyan parks – Reticulated Giraffe, Grevy’s Zebra (larger with narrow stripes) the longnecked gerenuk gazelle and the blue-legged Somali Ostrich as well as elephant, lion, leopard, cheetah and other African wildlife species. Depart to the legendary Masai Mara with its rolling-hills and rivers. The park is famous for its abundance of wildlife all year round. On the last day return to Nairobi.

Not included • International air • Electronic visa for Kenya ($), must be obtain online prior departure at www.evisa.go.ke • Optional excursions • Beverages • Items of a personal nature • Gratuities to hotel personnel, guides and drivers.

Morning arrival in Nairobi. You will be welcomed our representative and assisted with your transfer to your hotel. Be ready for some fun!! Drive to Daphne Sheldrick orphanage to watch the tiny orphans at their baths and hear from their keepers how each one has been loved and brought up (from 11am -12noon). Continue to Giraffe Centre where you will have an opportunity to feed the Rothschild giraffes. Thereafter you will drive to Carnivore for lunch and return to your hotel. Afternoon at leisure. (B) Accommodation: Nairobi for 1 night
2

After breakfast drive to Sweetwaters Game Sanctuary where you arrive in time for lunch. The privately owned 22,000 acre Sweetwaters game reserve and chimpanzee sanctuary has an abundance of wildlife and tropical vegetation and enjoys magnificent views across the bush to the snow-capped peaks of Mt. Kenya. It boasts all of the “Big 5” game – Lion, Elephant, Rhino, Leopard and Buffalo. Only 2.5 hours or 250 kilometers north of Nairobi on a good highway, the reserve is easily accessible and has the highest density of wildlife per square kilometer. The afternoon game drive will give you an opportunity to visit chimpanzee sanctuary and meet Morani the pet rhinoceros. (B/L/D) Accommodation: Sweetwaters Game Sanctuary for 1 night
5

After breakfast continue to Lake Naivasha which is the highest and purest of the Rift Valley lakes. Your boat cruise here takes you to the breeding grounds of pelicans, fish eagles, and cormorants. Spot the primeval hippos lurking in the shallow water and the zebras and antelopes grazing on Crescent Island. Lunch at Lake Naivasha Country Club. In the afternoon drive to the Great Rift Valley. (B/L/D) Accommodation: Great Rift Valley for 1 night (WHILST AT LAKE NAIVASHA – KIDS ADVENTURE – Star gazing, basic lessons on the stars Basic first aid lessons Learn survival skills – finding water, food, traps and snares Learn how to make a fire using sticks Bush orienteering lessons Visit to Eburru Forest, activities like nature study on medicinal plants/tree identification, bird identification etc. Visit the water harvesting project at Eburu and experience the hot water springs, steam bathing and tapping at Eburru. Visit the local school. Visit to Hell’s Gate Park. Enjoy a guided short walk through the gorges and a game drive to view plains game. Visit to Crater Lake Visit Lake Naivasha and enjoy a boat ride)
6

After breakfast traverse the Rift Valley and ascend its western rim. You are now in Masai country, where sedentary crop farming gives way to nomadic cattle herding. Drive to. Red -clad, with spear Masai warriors tend their herds of cattle among the wildlife, admirably unmoved by the presence of large predators. Children can take part in the activities of the Adventurers’ Club Afternoon game drive in the Mara, famous for the Wildebeest and Zebra migration and its abundance of wildlife . (B/L/D) Accommodation: Masai Mara for 2 nights
7

Morning and afternoon game drives in this spectacular game reserve, all with superb photographic opportunities. Blessed with a permanent water supply, Masai Mara has a permanent populat ion of plains game. The “big five” – elephant, buffalo, lion, leopard and rhino are quite common. . During the afternoon game drive visit a Samburu traditional to experience their way of life and learn more about their traditional believes and culture. (B/L/D)
8

Today you leave behind the plains of the Masai Mara and drive the journey through the Great Rift Valley back to Nairobi. Transfer to Jomo Kenyatta International Airport for your onward flight. (B) 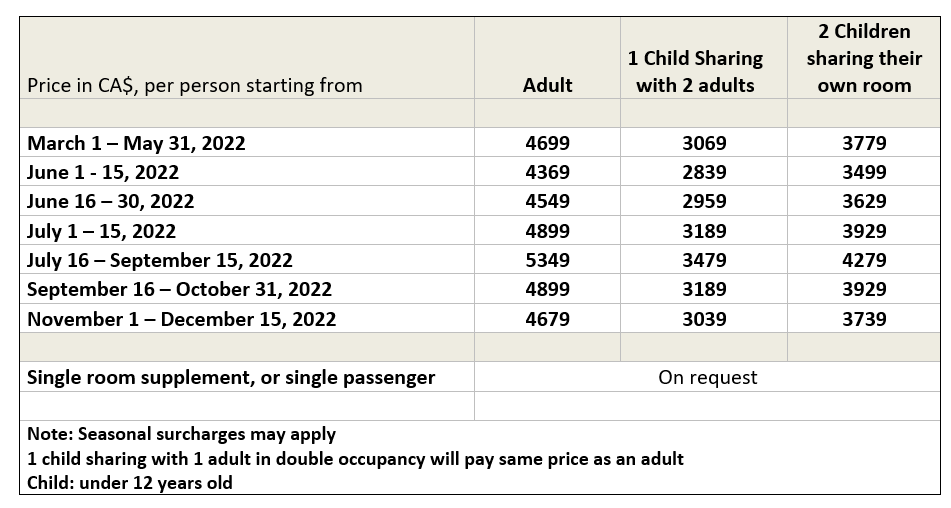 **Prices in this document are for information only; they were issued at press time, for the current year. Please note that due to exchange rates and temporary promotions, they can increase or decrease at any time. Contact your travel agent for the price and promotion of the moment The prices indicated exclude the contribution to the Customer Compensation Fund of $3.50 per $1,000 of tourism product or service purchased from a travel agent in Quebec.
$4,369
Starting from, per person
PRIVATE TOUR