On this journey, you’ll be able to see the different sides of Hawaii. We’ll visit the three most significant islands; O’ahu, Island of Hawaii and Maui, each unique and diverse. Start in Honolulu, Hawaii’s capital and largest city, and explore the other two islands, its towns, beaches, parks, and volcanoes, and experience the hospitality of the locals. The trip concludes in Maui, home to the “Road to Hana”, arguably one of the best natural attractions in Hawaii.

Arrive at the Daniel K. Inouye International Airport in Honolulu and immediately immerse yourself in the Hawaiian atmosphere. Proceed to your hotel for the start of this wonderful journey. Home to the State Capitol, Honolulu is the vibrant epicenter of Hawaii and the place where most of the people on O’ahu live. Here you’ll find everything from historic landmarks and treasured monuments to world-class shopping and a flourishing arts and culture scene. Be sure to explore the vibrant downtown district. Next to the skyscrapers of the island’s main business district, you’ll find important landmarks like the Iolani Palace, the King Kamehameha I statue, the Kawaiahao Church and the Aloha Tower. Clustered within blocks of each other, it’s easy to take a walking tour of these important cultural landmarks and architectural wonders. As for dining, Honolulu has a lot to offer. In Waikiki, Kalakaua and Kuhio Avenues and at gathering places like the Royal Hawaiian Center and the Waikiki Beach Walk. And the fun keeps going long after the Waikiki sunset with amazing nightlife and live music.

Aloha! Time to prepare for your second day in O’ahu. Spend some time to relax, or head out for an exciting daytrip to explore everything there is to see on the island. The best beaches of O’ahu are undoubtedly in Waikiki. From Duke Kahanamoku Beach to Kaimana (San Souci) Beach, enjoy the best the ocean has to offer. Whether it’s surfing, a nice swim or just a lazy day at the beach, in Waikiki you can have it all. While in the area, shopaholics will find their heart’s desires at the Ala Moana Center, the biggest open-air shopping mall in the United States. The adventurous soul can make a trip to Diamond Head State Monument, a volcanic tuff cone and one of the most iconic landmarks of O’ahu. Head out for the historic, yet slightly challenging hike, from the trailhead to the summit and indulge in the spectacular views along the way. Be sure to arrive early. It can get very busy and after 4:30 PM it is not allowed to enter the hiking trail.

Today, seize the opportunity to explore the island further. A must-see is Pearl Harbor. Named for the pearl oysters once harvested there, it’s the largest natural harbor in Hawaii, a World War II Valor in the Pacific National Monument, and the only naval base in the United States to be designated a National Historical Landmark. Highlight is the World War II Valor in the Pacific National Monument, which consists of 9 historic locations in 3 of the westernmost United States - California, Alaska, and Hawaii. Of these, five are located within Pearl Harbor itself: the USS Arizona Memorial, the USS Oklahoma Memorial, the USS Utah Memorial, and parts of Ford Island and Battleship Row. Here, you’ll learn about one of the most pivotal moments in US history: the attack on Pearl Harbor, and the subsequent entry of the United States into World War II. Just a 30-minute drive east, nothing is far away on O’ahu, is Kualoa, a private nature reserve, as well as a popular tourist attraction and filming location of movies such as Pearl Harbor, Godzilla, Kong: Skull Island, Jumanji, and Jurassic Park. Tours are available at the park where movie buffs can learn about the filming locations as well as the stunning natural environment of Kualoa.

Time to leave O'ahu behind and head to the Island of Hawaii, more commonly known as Big Island, as it’s the largest of the Hawaiian archipelago. In fact, it’s larger than all the others combined, and it keeps expanding. The Big Island also has various types of climate zones. This extraordinary feature guarantees a day of extreme variety; you can start your day at the Ka’u desert, home to dried lava remnants, volcanic ash, sand, and gravel desert and end up in a tropical rainforest. Most of the population live in Hilo or in Kailua-Kona, the center of commerce and of the tourist industry on West Hawaii. It’s here that your Big Island adventure begins. Famous for sport fishing, snorkeling, sunsets, and coffee, which is cultivated on the slopes of Mount Hualalai, there’s plenty to do in Kalua-Kona. And because the mountains block the northeasterly trade winds, Kona gets very little rain and enjoys more than 300 days of sunshine a year. On Big Island, there’s no better place to stay.

This morning, prepare for a day in Kailua-Kona with a cup of coffee, brewed with locally grown beans. Kailua-Kona’s beaches aren’t as famous as some of the others in Hawaii, they’re also less crowded, which is a plus if you prefer a little extra space while you’re sunbathing. Next to being a great spot to see turtles, the snorkeling is particularly good in this area. Want to relax without getting your feet wet? Ali’i Drive is the place to go. Here you can find shops selling souvenirs and t-shirts, fashion, and convenience stores. If you’re hungry or craving a nice drink, this place is swarming with bars and restaurants. There’s more though; here you can also find Hulihe’e Palace, a museum that was once a vacation house for royalty or stop at the closeby Ahu’ena Heiau, a temple that is dedicated to the Hawaiian god, Lono. This temple was ordered to be restored by King Kamehameha himself in the early 1800’s. When you would rather head out in the beautiful nature of Big Island, take the Saddle Road, a scenic drive crossing the island, with breathtaking lookouts along the route.
6

Today, you’ll travel to Maui, the second largest island of Hawaii, and the last destination of this journey. It’s primarily known for its nature and diverse landscapes, a result of a unique combination of geology, topography, and climate. Kahului is the central hub of the island, located -like most other towns- near the coast and can be reached from almost anywhere. Maui flawlessly combines eco-tourism with resort-like vacationing and offers countless possibilities for both adventurers, families and those who just want to unwind. An oasis of majestic ocean hideaways, lush green mountains and picturesque beaches, the island of Maui epitomizes mythical wonder. Add to that the genuine Maui culture, which locals would love you to partake in. There are over 30 beaches and bays to snorkel at around the island and you’ll find even the locals hitting the waves to surf.

This morning, head out early for a must-do activity. The Road to Hana, a route curving around mountains and passing by black sand beaches and waterfalls, is one of Maui’s signature adventures. In the case of this adventure, it’s just as much about the journey as it is the destination. Along the way, major attractions are the Seven Sacred Pools and waterfalls of Ohe’o Gulch. Although everything is rather close by on Maui, it’s advised to use an entire day exploring the Road to Hana. With its many curves and lookouts, it takes some time to see it all.
8

Today, visit the sprawling Haleakala National Park encompasses the island’s highest peak, volcanic Haleakala, with the famous Haleakalā Crater on the summit. The Park is known for its unique volcanic features, rare endemic flora and fauna, its long scenic drive with numerous overlooks, and the unusually clear views of the night sky available as well as amazing sunrises. So, if you’re an early bird, you’re in for a treat.
9

Enjoy your last moments in Hawaii and depart for the airport at leisure.
City
Hotel
Honolulu 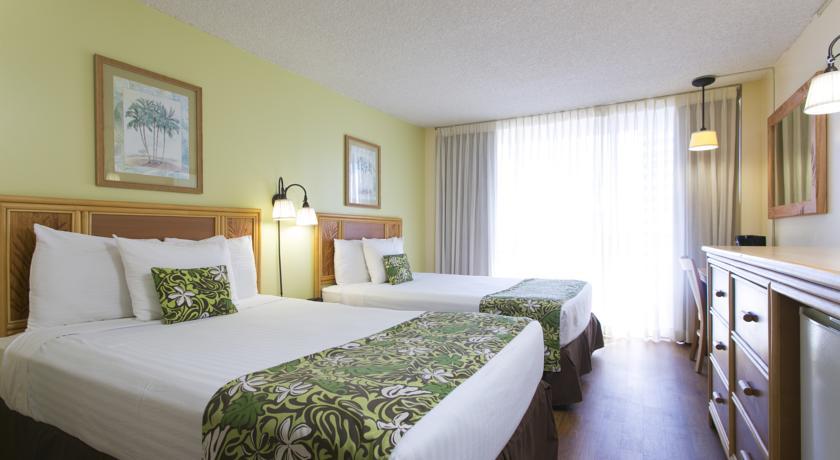 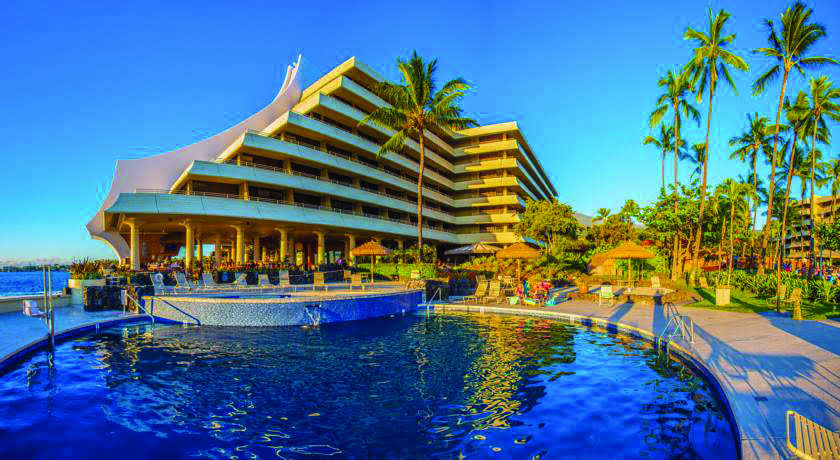 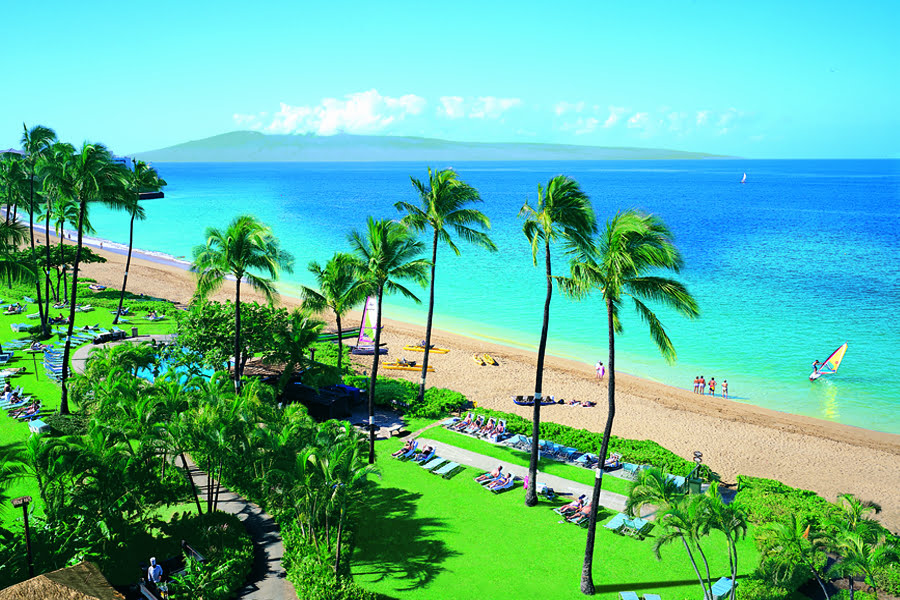 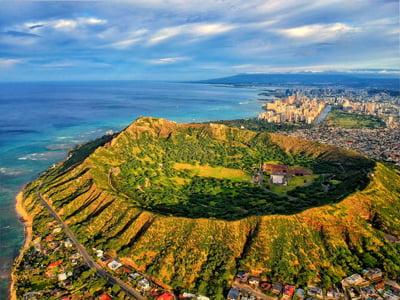 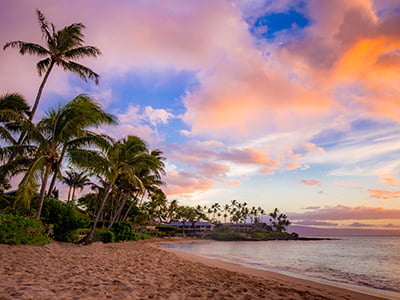 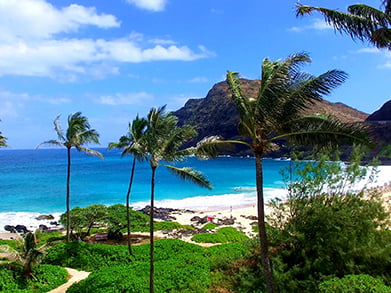 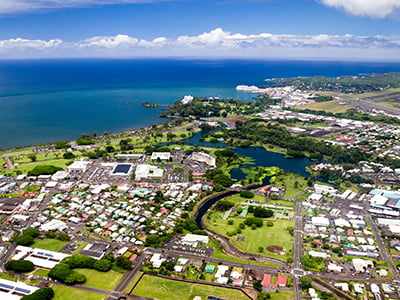 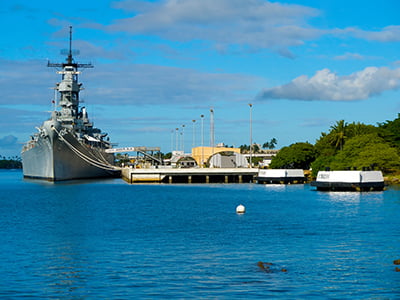 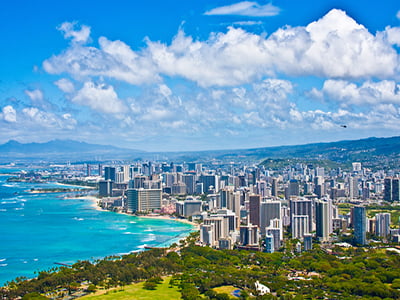 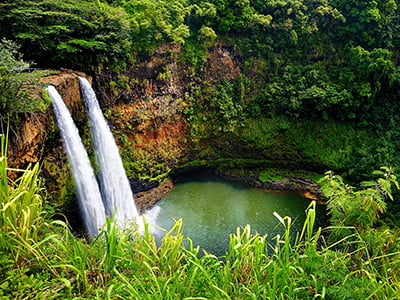 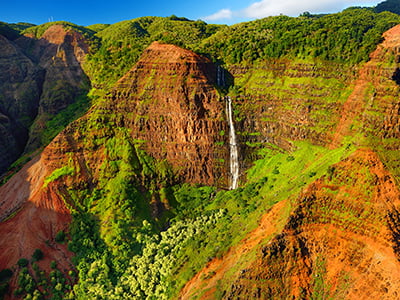