This is a private tour with a private driver-guide (the driver is the guide as well) and car. Minimum 2 passengers required to guarantee the tour.


Arrive in Colombo. Meet and assist on arrival and transfer to your hotel in Negombo (about 1hr). Rest of the day is at leisure to enjoy your surroundings.
Accommodation: Negombo for 1 night


Check out and transfer to Pinnawala where an orphanage was started in 1975 to house the abandoned and the wounded elephants. The number of elephants has increased to more than 65 now; including Baby Elephants brought from various parts, as well as some of the more than 25 babies born, as a result of the captive breeding programme. The best time to visit is the feeding time from 0915-0945 and 1415-1445 and the bathing time from 1000-11.00 and 1500-1600 when all the elephants are taken to the river close by. Transfer to Dambulla Cave Temple, a vast isolated rock mass 500 feet high and a mile around the base and it houses the famous Rock Temple dating to the First Century B.C. The caves of Dambulla sheltered King Walagamba during his 14 years of exile from Anuradhapura. When he regained the throne he built the most magnificent of Rock Temples to be found on the Island. Transfer to your hotel for overnight stay. (B)
Accommodation: 3 nights in Dambulla


Depart for Polonnaruwa, a UNESCO World Heritage Site and once the Capital of Sri Lanka from 11th – 13th Centuries. This medieval capital was fortified with inner & outer moats and inner & outer walls. Proceed to the Minneriya or Kaudulla National park for an afternoon jeep safari.
This National Park with 8889 hectares is famous for its large population of elephants in herds of 100 to 150 roaming in the jungle and seen in the catchment area of the lake. Approximately 300 wild elephants, wild buffaloes, wild boar, spotted deer, sloth bear, Sambhur, leopards, crocodiles, jackals, 9 kinds of amphibians, 25 kinds of reptiles, 160 species of birds, 26 varieties of fishes, 78 varieties of butterflies are recorded from the Minneriya National Park. (B)


Proceed to Sigiriya Rock Fortress. After an ancient prince killed his father to claim the throne, he was forced to flee to his pleasure palace and convert it into a fortress to guard against his opposition. The spectacular citadel of Sigiriya built on a giant rock rises sheer and impregnable out of the plains below. Note: Please note that to reach the top of Sigiriya Rock, there are nearly 1,200 stone steps up and then down. Anybody in reasonably good condition will be able to venture to the top of Sigiriya Rock and it’s certainly worth the effort, however important to know these little details before embarking on this outing.
This afternoon set out on an exciting excursion to Senadiriyagama, a beautiful little village close to Sigiriya. Your first visit is to the village temple with a history spanning over 300 years. You will be greeted by the village folk with lotus flowers which are customarily believed to represent purity, spiritual awakening and faithfulness. The short tractor ride along the gravel road through the village that leads up to the temple is an experience as you will see the smiling faces of villagers engaging in their daily routines. Once you arrive at the temple, you will light oil lamps, incense sticks and offer flowers to the Sacred Bo Tree and stupa. You will then walk towards “Budu Geya” – the main house with Senadhira, a local farmer who will fervently explain the history of the temple and the village relating to stories about how Senadiriyagama temple was once used as a resting camp for troops during the period when the land was ruled by kings. After a “Pirith” chanting, you will be blessed by the temple monk for the onward journey by tying a white string commonly known by the locals as a “Pirith Noola”.
Thereafter experience a catamaran ride on the Senadiriyagama Lake. Once you arrive you will take a short walk towards the “Wadiya” – a mud hut, where a cool king coconut awaits to beat the hot sun. You will then partake in a delicious Sri Lankan meal with local delicacies and tropical fruits prepared for you by a local family. After lunch, a tuk tuk will transport you back to the vehicle to take you back to the main road. Return to hotel. (B)


After early breakfast proceed to Matale Royal Spice Garden. An agricultural zone in the Central Province, Matale seldom drops off the maps due to its remarkable contribution through flagship crops of the island extending from tea, rubber & vegetables to spices. Spearheading the Rebellion back in 1848, Matale today takes immense pride in its story woven around spices. Stop by the side of a spice garden – into which you will be most welcome – and observe the therapeutic values of spices & processes over a refreshing cup of herbal tea! Transfer to Kandy and check into your hotel. (B)
Accommodation: Kandy for 2 nights


After breakfast, proceed to Peradeniya Botanical garden. Walk into this 147 acre bliss of an experience, passing well-tended lawns, pavilions & an octagon conservatory.
Continue to Colombo for a city tour. The hill capital is another “World Heritage Site”. It was the last stronghold of the Sinhalese Kings during the Portuguese, Dutch and British rule and finally ceded to the British in 1815 after an agreement. To the Buddhists of Sri Lanka and the World, Kandy is one of the most sacred sites as it is the home of the “Dalada Maligawa” – Temple of the Sacred Tooth Relic of Lord Buddha.
Close by are the remains of the Royal Palace where the Queens stayed – now used for the National Museum. The Bathing Pavilion (“Ulpenge”) is by the Lake and in the Center of the lake is the Island called “Kiri samudraya” (Milk white ocean) used by the kings as the summerhouse. (B)


After breakfast proceed to the tea plantations at Nuwara Eliya. Visit a tea plantation and a tea factory, where the best tea in the world is produced. Taste a cup of pure Ceylon tea in the factory. Thereafter proceed to Nuwara Eliya. Misty steep roads, twisting through lush green blankets of tea bushes in a cool climate, remind visitors that they are within the range of the renowned British colonial retreat, Nuwara Eliya. Augmented by an English countryside atmosphere, the city of light – once governed by English & Scottish planters – is still studded with colonial bungalows, hedgerows & one of the finest 18-hole golf courses in the world. A hike through the green grass and red-brick walls should present breathtaking views of a buzzing countryside hamlet. Transfer to your hotel. (B)
Accommodation: Nuwara Eliya for 1 night


Check out and transfer to Yala. 127 miles from Colombo and 8 miles from Bandarawela, on the leeward side of the central mountains, the view from Ella Gap is one of the most spectacular scenic sights in Sri Lanka – the landscape falls away in a dizzy drop of 3000ft to the eastern plains.
The Ella rock is famous for the cave of Ravana a legendary king of Sri Lanka ruled during the pre-historic times. The 1080-foot high waterfall few miles from the Ella Rest House is one of the most beautiful falls in the country. Visit the Kataragama Temple en route. Arrive in Yala and check into your hotel (B)
Accommodation: 2 nights in Yala 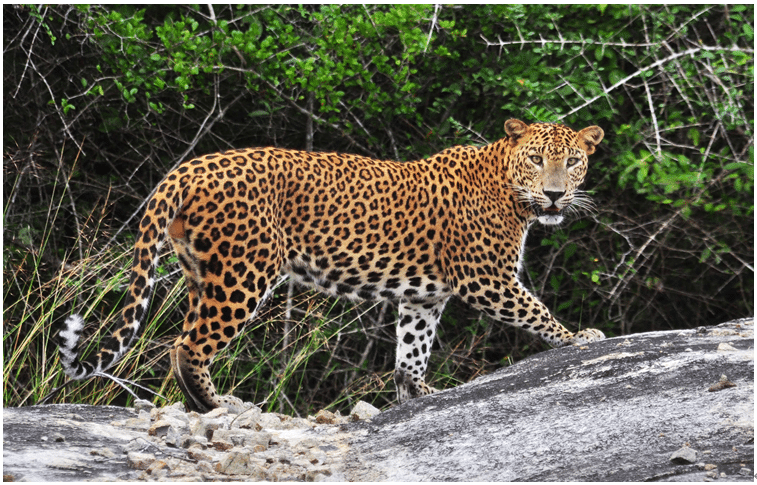 
Spend the morning at leisure enjoying the hotel amenities. Proceed on an afternoon safari at Yala National Park.
Yala National park is Sri Lanka’s most visited wildlife reserve. Yala covers an area of 1260 square kilometres. The park’s dry-zone landscape is strikingly beautiful and the park’s wildlife has its own distinctive charm, with huddles of colourful painted storks perched on the incongruously conjoined sight of elephants marching sedately through the bush while rabbits scamper through the undergrowth. Leopards, sloth bears and elephants are the “big 3” here although crocodiles, jackals and the many variety of birds are also a huge draw to this park which is the largest national park in the country.


Check out and transfer to Galle, the South Coast’s major city, whose oldest landmark is the massive Portuguese and Dutch Fort which is a “World Heritage Site”. Today, the 90-acre Galle Fort shows no evidence of the Portuguese founders. The Dutch incorporated the Portuguese northern wall in a great rampart in 1663. A second, taller wall was built inside of it. Between the two walls, a covered passage connected the central bastion with the Fort’s two half bastions overlooking the sea. Proceed to Bentota, and En route visit a turtle hatchery. Upon arrival, check in to your overnight hotel. (B)
Accommodation: 3 nights in Bentota


After breakfast, proceed to Colombo Airport. End of services. (B)

$1,899
Starting from, per person
PRIVATE TOUR