Our tour to Vietnam will take you to places you’ll surely never forget! The north with its breathtaking scenery of Halong Bay will leave you speechless. Hue, in the centre, with its Perfume River, and Ho Chi Minh with its Mekong Delta, historical landmarks and the famous Cuchi tunnels will definitely make this the most memorable of all your travels


Arrive in Hanoi, city of lakes, shaded boulevards and public parks. Transfer to your hotel.
2


Today, your visit will include Hoan Kiem Lake in the city center and the Temple of Literature dedicated to Confucius.Hoan Kiem Lake (Hoan Kiem means Lake of the Returned Sword), is a lake in the historical centre of the Hanoi capital. It is one of the major scenic spots in the city and serves as a focal point for its public life. Legend has it that King Le Loi handed a magic sword called Heaven’s Will which brought him victory in his revolt against the Chinese Ming dynasty back to the Golden Turtle God in the lake. The Tortoise Tower (Thap Rua) standing on a small island near the centre of the lake is linked to the legend. The Ngoc Son Temple was erected in the 18th century. It honours the 13th -century military leader Tran Hung Dao who distinguished himself in the fight against the Yuan – Mongol invaders, Van Xuong, a scholar and Nguyen Van Sieu, a Confucian master and famous writer in charge of repairs made to the temple in 1864. Jade Island is connected to the shore by the wooden red-painted Huc Bridge (The Huc, means Morning Sunlight. Then visit the Temple of Literature. The Temple of Literature has a peaceful series of walled courtyards and graceful gateways, and this monument is one of the best-preserved examples of traditional Vietnamese architecture. Founded in 1070 and dedicated to Confucius, this was also the site of Vietnam’s first university. In one courtyard, giant stone tortoises bear stele on their backs, listing the accomplishments of graduating scholars. After lunch, visit the Museum of Ethnology which brings to life the astonishing ethnic diversity in Vietnam, with art and artefacts from the 54 different ethnic groups that inhabit the country. Inside the museum are detailed descriptions of minority groups, with examples of their traditional clothing and way of life. Outside are faithful reconstructions of traditional longhouses, cemeteries and other distinctive ethnic buildings. In the evening enjoy a welcome dinner. (B/L/D)
Overnight in Hanoi
3


This morning, transfer to Tuan Chau Marina port. After check-in on your “junk” boat (without guide). Depart from Hanoi to Halong Bay; en route take a short stop for a break. Transfer with a tender to the comfortable cruise and enjoy a welcome drink aboard. Begin the cruise through majestic Halong Bay while lunch is served. Enjoy the magical bay where thousands of sculpted limestone islands rise from the waves like dragon’s teeth. The cruise continues cruising through a fishing village on the bay and passes the spectacular limestone caves dotted around the bay. Soak up the sun on the top deck with optional on-board activities: sunbathing, and photo opportunities. In the evening the chef will prepare a splendid meal comprised of fresh seafood dishes and other traditional dishes. (B/L/D)
Overnight on-board.
4


Aboard the traditional cruise through Halong Bay, greet the day with a morning Tai Chi exercise that offer a perfect opportunity to view the sunrise over the bay. After breakfast, visit a beautiful limestone grotto then back to the boat for a final glimpse of the Halong Bay while cruising back to the dock. Check out luggage and bid tidings to beautiful Halong Bay. Transfer from Halong to  Noi Bai Airport for your flight to Hue. Then you will be transferred to your hotel in Hue.
Overnight in Hue
5


Go back in time and bask in the beauty of the Nguyen dynasty. The 19th century Imperial Citadel is a city within a city. The striking Flag Tower and imposing Ngo Mon Gate lead into spacious courtyards, palaces, pavilions, reception halls and lotus ponds – providing a fascinating glimpse into court life. Visit the Rumoured to be haunted, and a flashpoint for anti-government protests, and the site of a famous self-immolation by a monk. Thien Mu Pagoda will lure us in with its beauty, elegant architecture and evocative past.
We’ll travel by boat along the Perfume River to visit the iconic pagoda, along with the Imperial Tomb of Minh Mang. Afterwards visit to the Imperial Citadel. Located in the heart of Hue is the Imperial Citadel, a vast complex built in the early 19th century and modelled after the Forbidden City of Peking. The original walls stretched for 10 km and were surrounded by a wide moat. Today, most of the buildings have been destroyed due to bombing during the Vietnam-American War, but the monuments that remain provide a fascinating glimpse into the court life of the Nguyen Dynasty. Approach the city past the striking Flag Tower, where a giant Vietnamese flag waves proudly overhead, to the imposing Ngo Mon Gate, the main entrance to the Imperial Enclosure. Enter into an area of spacious courtyards and serene lotus ponds, and visit Dien Tho Residence (Dien Tho palace) where the Queen mother lived, visit Thai Hoa Palace, the magnificently decorated reception hall, the Halls of the Mandarins, and the original Nine Dynastic Urns, among other sites, including a visit to the Hue Royal Antiquities Museum. (B/L)
Overnight in Hue
6


Twisting winding curves, sudden bends, views that take your breath away – welcome to the Hai Van Pass. We get to drive along this incredible mountain pass on the way to Danang.
This city is home to beaches made famous by American soldiers during the Vietnam War, several quirky bridges, and the wonderful Cham Museum containing the best collection of Cham sculpture. We’ll also stop at the Marble Mountains – a group of limestone and marble hills filled with caves. Today’s Highlights: Hai Van Pass, Danang, Cham Museum, Marble Mountains. (B/L)
Overnight in Hoi An
7


The quirky mix of Chinese, Japanese, Vietnamese and European influences makes Hoi An a photographers’ paradise. We’ll walk through the narrow winding streets of the old quarter past ochre-hued stone houses, lantern-filled shops and colourful fishing boats. One of the most iconic sights is the Japanese Covered Bridge. There are also ancient temples and merchant homes over 200 years old. We’ll explore many of the historical sites within the town. Today’s Highlights: Hoi An ancient town. Afternoon at leisure. (B/L)
Overnight in Hoi An
8


Today transfer from Hoi An to Danang Airport to take your flight towards Saigon. Then you will be transferred to your hotel in Saigon. Time at leisure. (B/L)
Overnight in Saigon
9


Today you will enjoy the Pedal and Paddle in Ben Tre (9 hours). We could end up feeling fruity as we cruise the Mekong River Islands! This area may be Vietnam’s -rice bowl’ but fruit orchards and coconut groves also thrive here. We’ll stop to see all the different uses for coconuts. A bicycle ride will bring us to the home of local antique collector, Uncle Six, who will show us how he climbs the coconut trees using just his bare hands. We can even try if we want! A rowing boat will take us along the water palm creek giving us a glimpse of daily life on the delta. Lunch will be an assortment of delicious dishes cooked by one of the locals of the Mekong Delta. Today’s Highlights: Ben Tre by boat and bicycle. (B/L)
Overnight in Saigon
10


Today you will spend the day touring Saigon the ever-vibrant, ever-changing –  where sleek skyscrapers loom over incense-infused temples and motorcycles rule the roads. There’s classic European-style landmarks; ancient temples and traditional buildings; as well as stark reminders of a recent more turbulent past. Visit the City Hall, also known as Hotel de Ville, was completed in 1908, and is at the northern end of Nguyen Hue Boulevard. With it’s ornate gingerbread facade it looks like the town hall of a French town. (It is viewable from outside only.) You will get also to see The colonial-era Opera House is today one of the main places for cultural exchange. (May be viewed from the outside only.) The Central Post Office is a French-style building with a glass canopy and iron frame right next to the Notre Dame Cathedral. The structure was built between 1886 and 1891 and is by far the largest post office in Vietnam. Then onto the Reunification Palace, the Independence Palace of the South Vietnamese president, was stormed by tanks on the 30th April 1975, signifying the fall of South Vietnam. It has been preserved in its original state. The War Remnants Museum is next , it  exhibits collections of weapons, photographs and memorabilia from two Indochina wars along with the original French ‘Guillotine’ brought here in the early 20th century. Cholon is the large Chinese neighbourhood to the west of the city in District 5. Cholon means ‘Big Market’, a good indication of the importance the Chinese have traditionally played in Vietnam’s economy. Jade Emperor Pagoda is one of the must see of Saigon. Built in 1909 by the city’s Chinese population, the architecture is a reflection of Cantonese temples. You can find the Buddhism and Taoism are inextricably linked here; the decor is inspired by many myths and Buddhism stories. Visit Giac Lam Pagoda, the oldest pagoda in Saigon, built at the end of the 17th century. The pagoda has not been renovated since 1900 so still retains most of the original architecture, layout and ornamentation. The pagoda incorporates aspects of Taoism and Confucianism and is home to ten monks. The tour  at Binh Tay market, where is Cholon’s main wholesale marketplace, and is a bustling centre for trade. The Ben Thanh Market is the central market of Saigon and the market and the surrounding streets make up one of the city’s liveliest areas. Everything commonly eaten, worn or used by the average resident of Saigon is available here. (B/L)
Overnight in Saigon
11


We’re going underground – deep into the Cu Chi Tunnels! These hand-dug tunnels changed the course of the Vietnam War. The well-camouflaged entrance holes lead into a network of incredibly narrow tunnels that stretch for over 200 kilometres connecting command posts, hospitals and shelters. We’ll learn about the life of the Vietcong and venture into some of the tunnels. The deadly, bamboo-spiked booby traps are another must-see. Today’s Highlights: Cu Chi Tunnnels. This walking tour will show us where the action’s at – right here on the ground! We don’t have to walk far to discover colourful back alleyways lined with flower shops, another selling locally-made guitars, and even one that specialises in restoring vintage Vespa scooters. A stroll through lively apartment blocks will reveal scenes of the urban working class. There’s a market to explore and an unusual museum that showcases the history of Vietnamese traditional medicine. We’ll stop for an iced coffee in a hidden cafe frequented by locals. The oldest coffee shop in Saigon, this retro establishment has a colourful history stretching back over seven decades. Today’s Highlights: Walking tour of Saigon, market, cafe (3.5 hours)” (B/L)
Overnight in Saigon
12


Transfer to airport for your return flight home. (B) 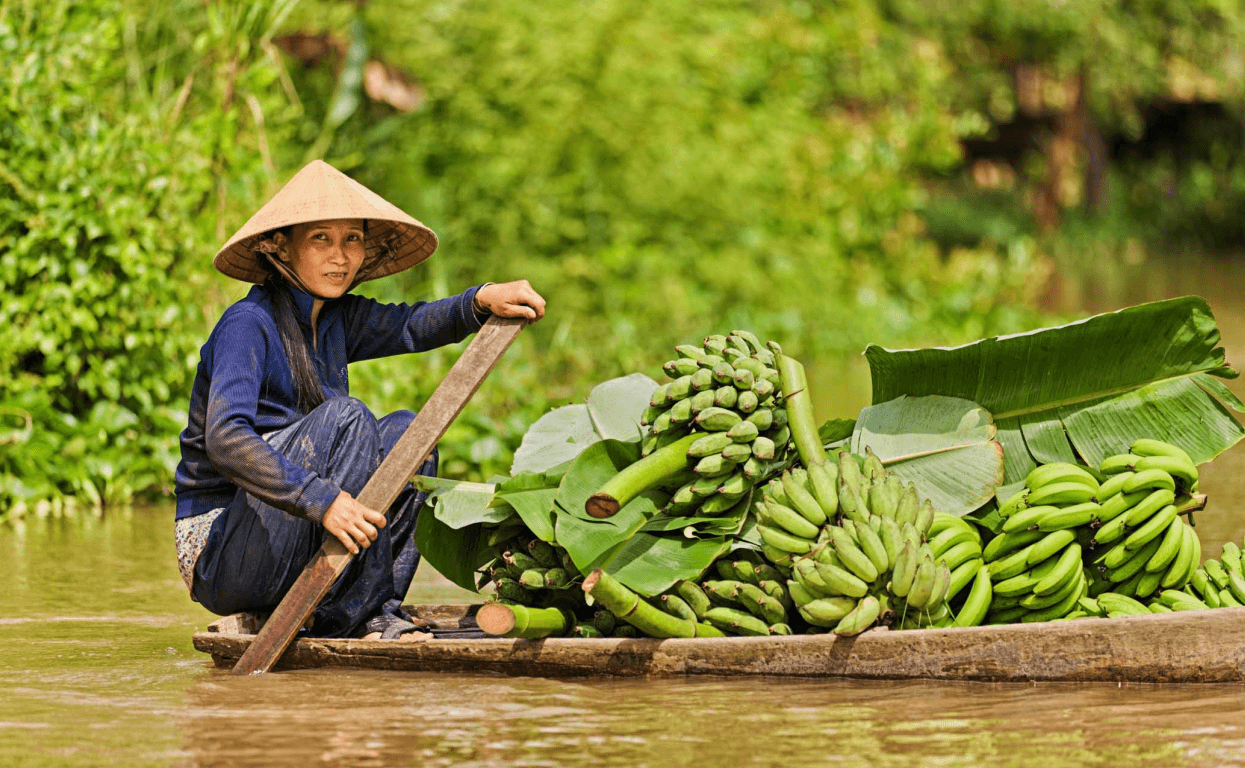 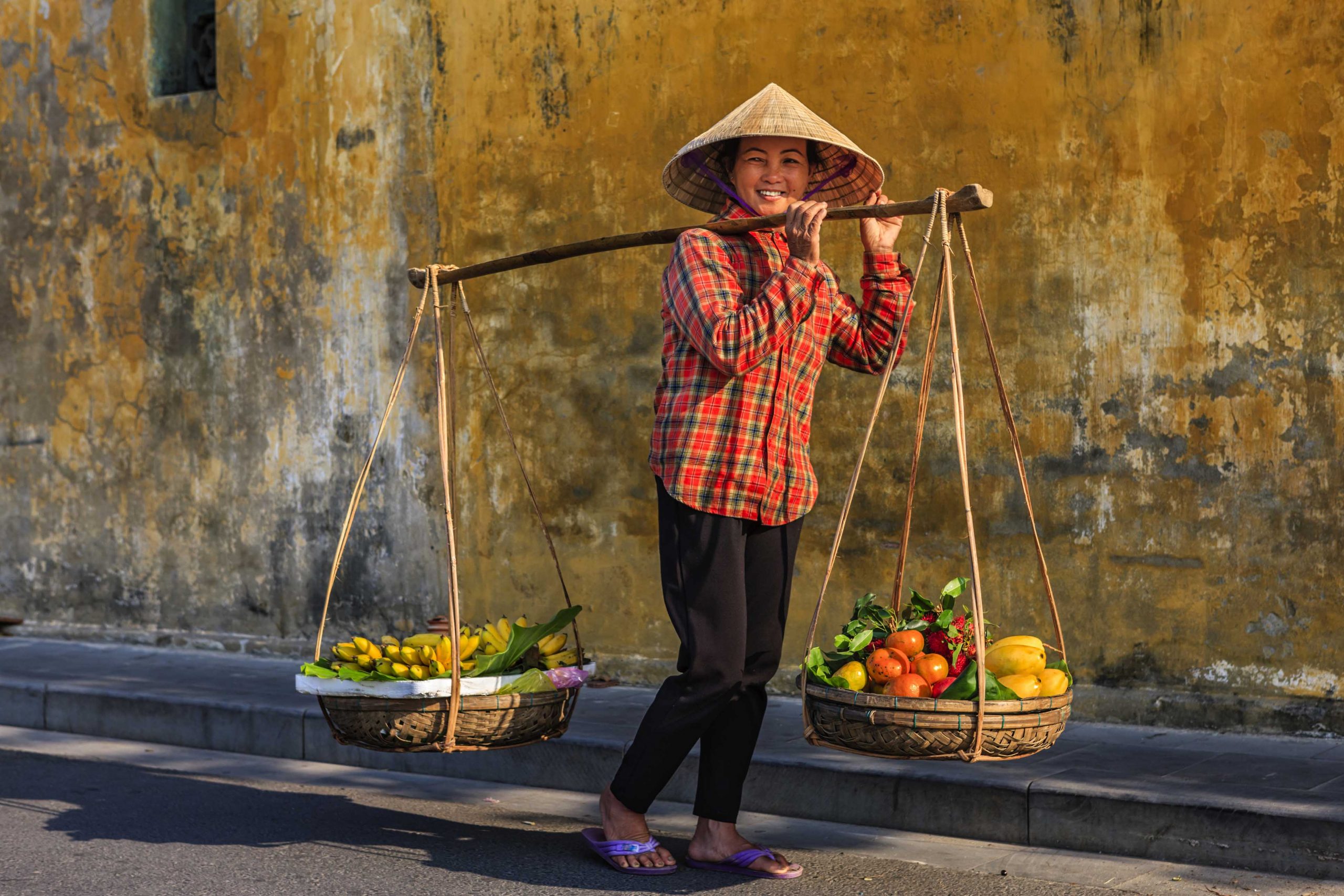 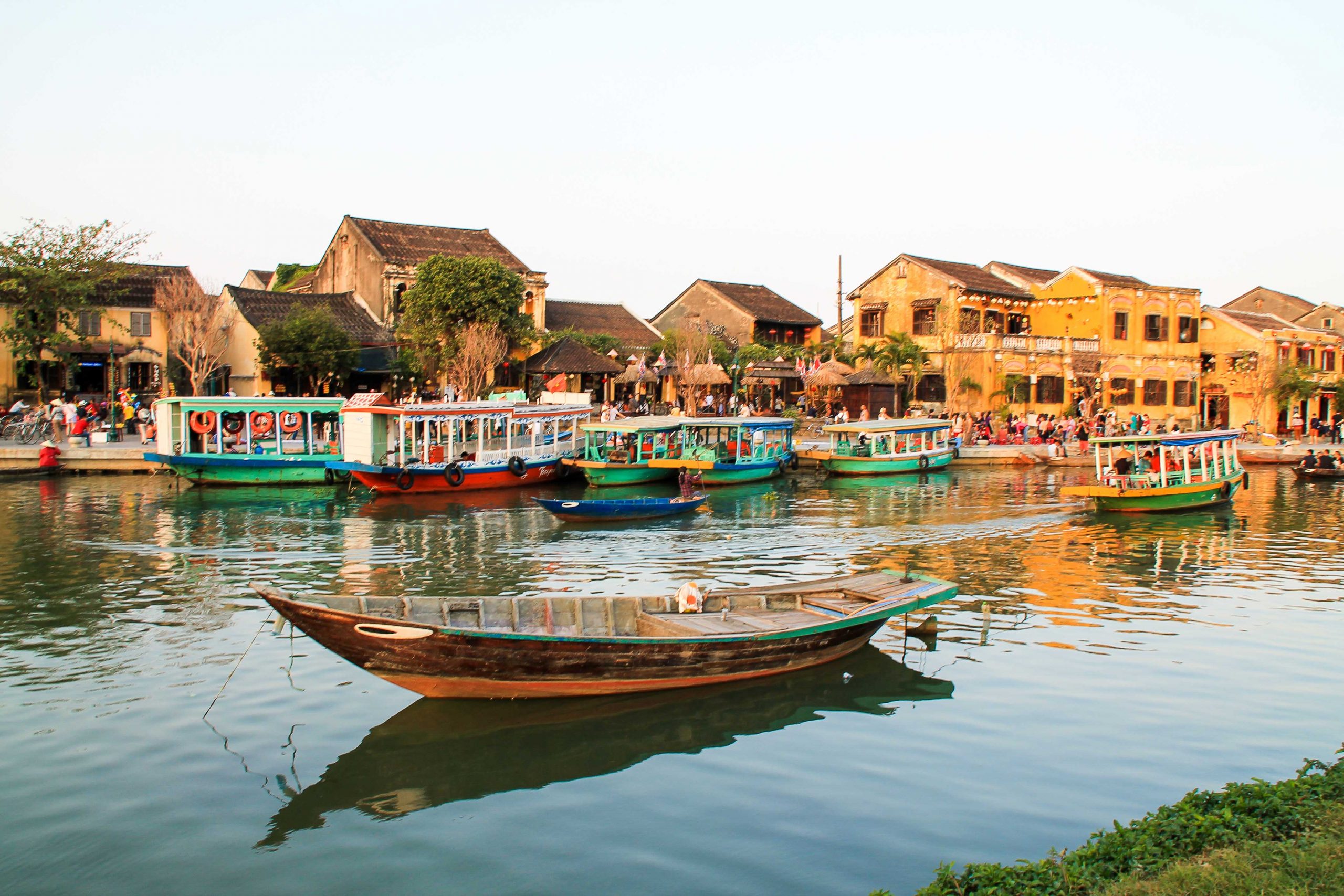 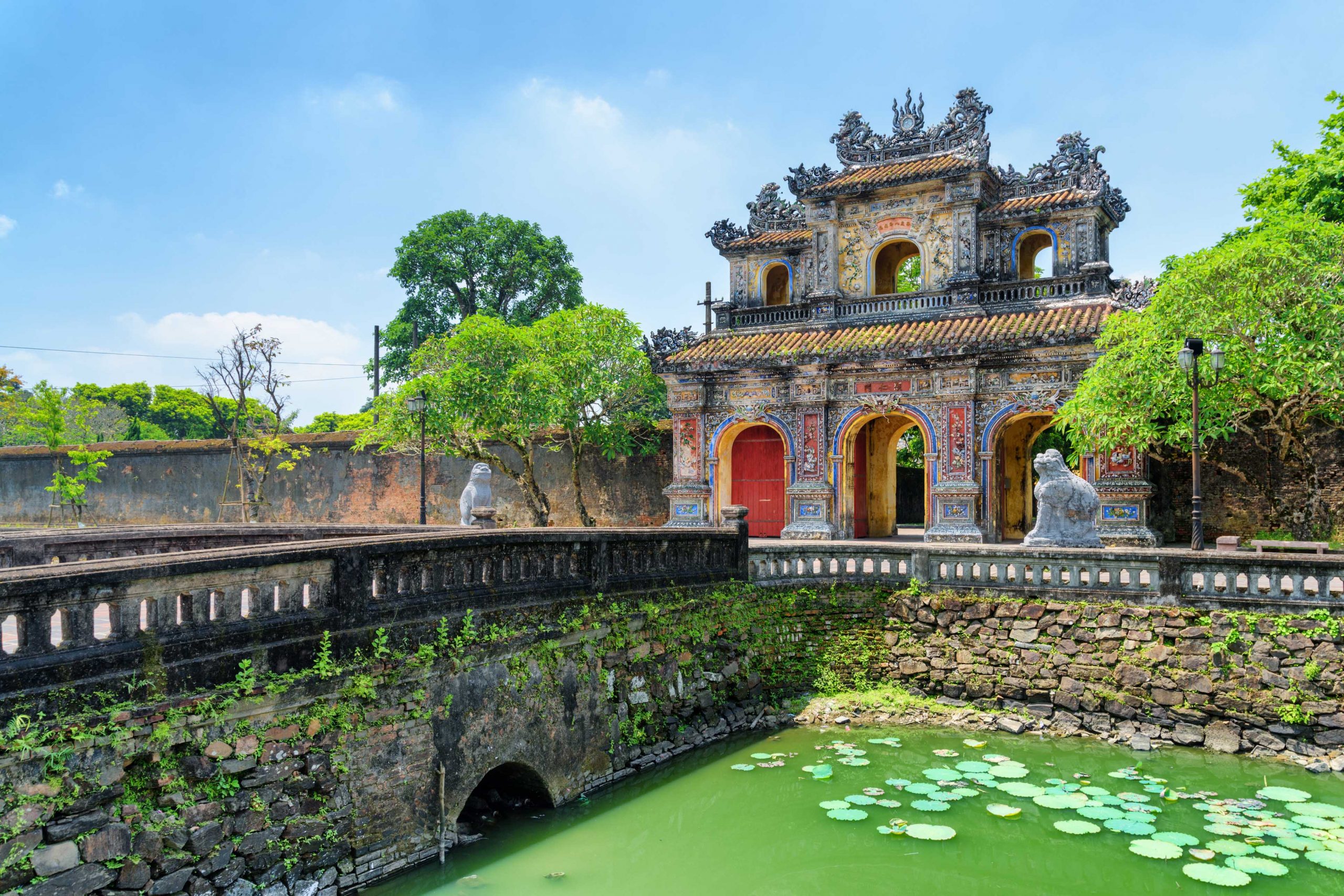 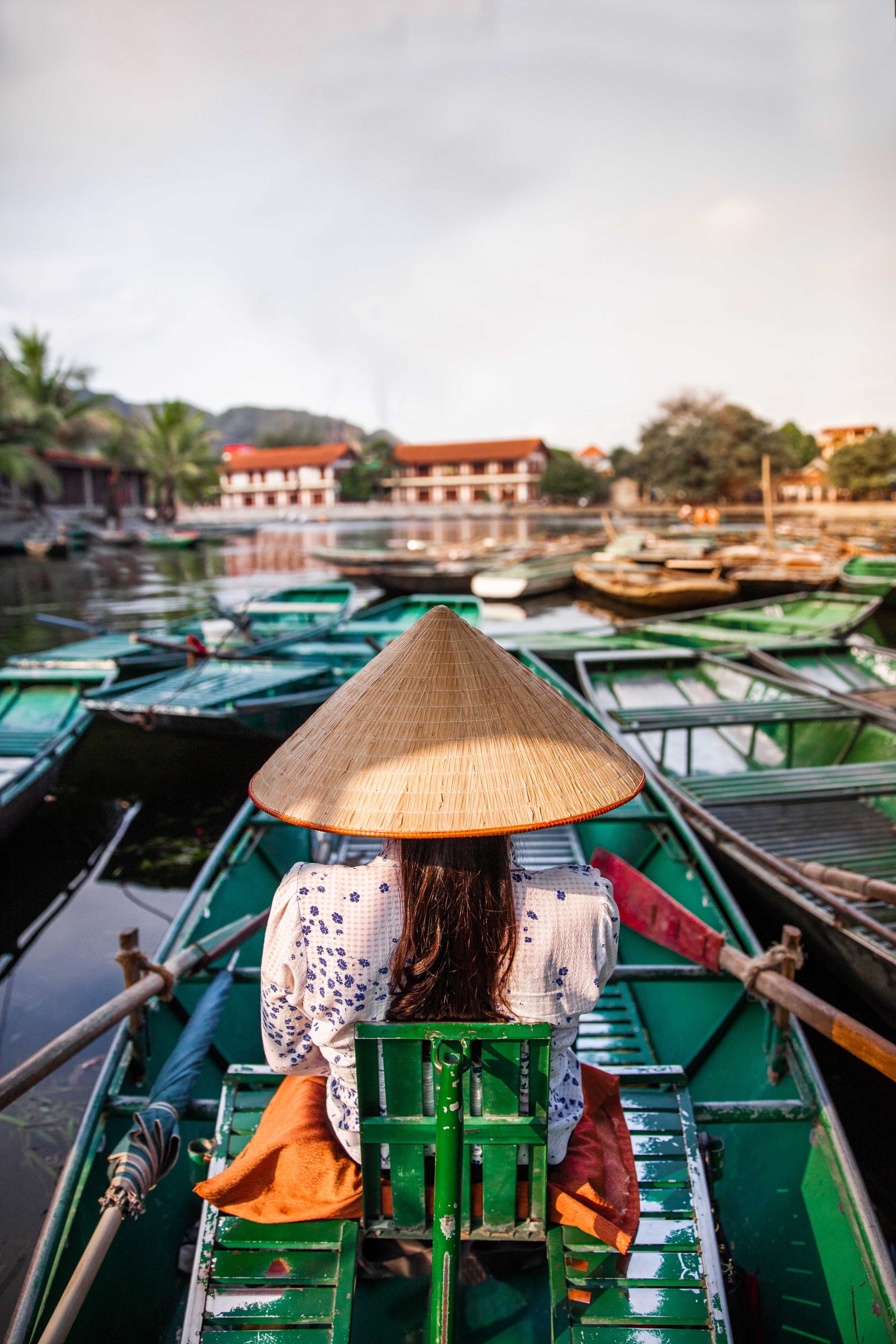 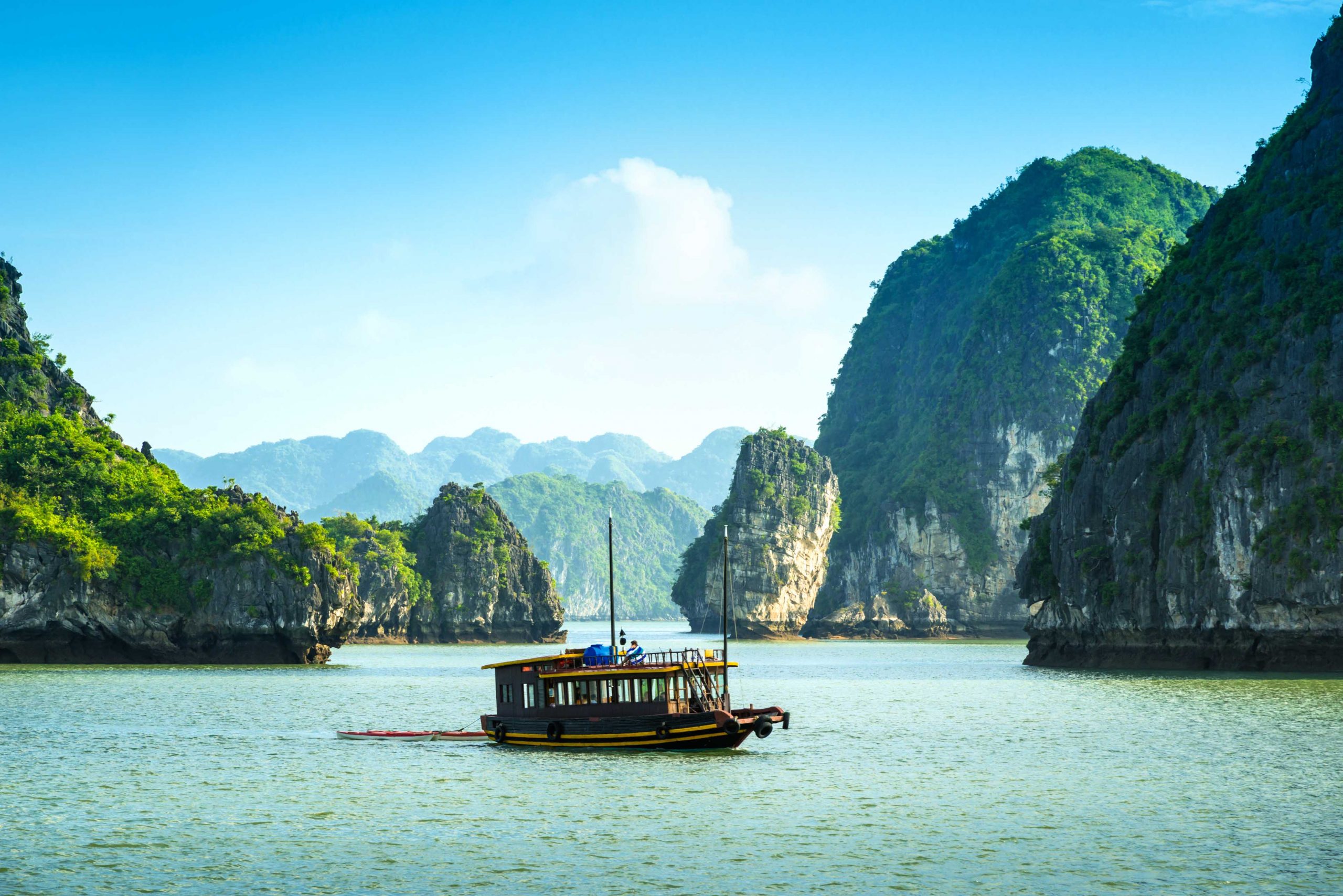 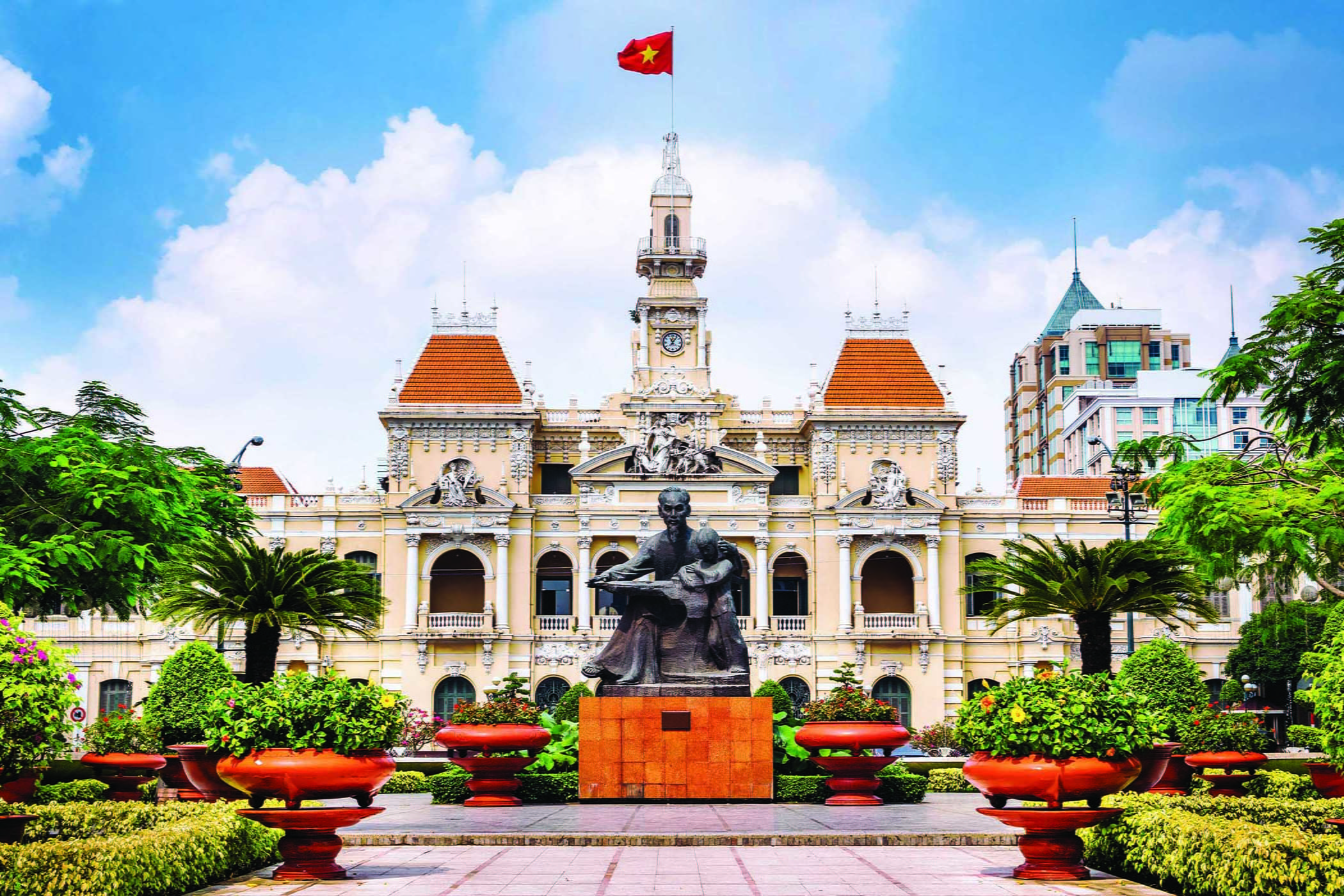 $2,999
Starting from, per person
PRIVATE TOUR